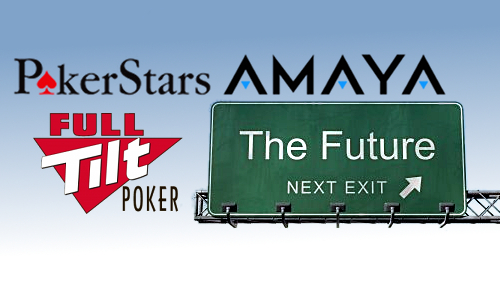 This Friday wasn’t quite Black Friday for PokerStars’ competitors, but the online gambling execs that danced for joy when Stars and Full Tilt Poker were forced to leave the US market have definitely lost some of the spring in their step. News that Canada’s Amaya Gaming Group had acquired the operations of Stars and FTP pushed Bwin.party shares down over 7% on Friday to 105.6p, a new low for the year and the lowest they’ve been since January 2013.

Shares in 888 Holdings, which currently operates in all three US states that have launched regulated online gambling markets, were down 6% on Friday. Betfair lost nearly 2%, spoiling what had been nice gains from this week’s full-year financials. Contributing to the malaise was Thursday’s news that New Jersey’s online market had seen revenue decline for the second straight month, poking further holes in the notion that the US market will be anyone’s savior in the short term.

Even UK-listed companies that don’t currently have online operations in New Jersey dipped 2-3% on Friday, which may have to do with Amaya CEO David Baazov’s comments that Amaya intends to broaden its horizons into both social gaming and sports betting. Baazov said Amaya intended to launch a sports betting product in 2015 and believes it “can become a strong operator in the market in a few years, keeping the existing online poker players from spending their dollars with other sportsbook operators.”

JERSEY SURE
On Friday, the New Jersey Division of Gaming Enforcement (DGE) announced it was “encouraged” by Amaya’s acquisition and the “expanded opportunities it might provide for New Jersey’s internet gaming industry.” Stars has a prospective deal with Resorts Atlantic City to participate in New Jersey’s online market and the only thing preventing their launch had been the lingering criminal indictment hanging over the head of Stars founder Isai Scheinberg. But with Isai and son Mark now riding off into the sunset to count their billions, the “significantly changed circumstances” the DGE had suggested were required for licensing seem to have been achieved.

New Jersey’s current crop of online operators will have a little time with which to brace themselves for Stars or FTP’s arrival. During Friday’s conference call to formally announce the deal, Baazov confirmed that the acquisition is expected to be complete by Sept. 30, 2014. In the meantime, don’t be surprised to see Caesars Interactive Entertainment boss Mitch Garber strolling barefoot along the shoreline, gazing wistfully out across the ocean, musing over what might have been.

BLAME CANADA
Baazov had described the acquisition of Stars and FTP as “transformative” for his company, but it’s also a huge shift for Stars, which has spent its entire life as a privately held company but will now have to adapt to life as a publicly traded firm. Questions now arise as to what this will means for Stars and FTP’s extensive dealings in unregulated gambling markets.

Speculation had IT that Amaya might pull Stars from Canada, due to possible conflicts with the online poker operations of Espace-jeux, the online gambling site of Quebec’s provincial lottery corporation, to which Amaya supplies gaming content. But on Friday, Stars’ director of poker room operations Steve Day posted a notice to the 2+2 forum, saying Stars “still plan to serve all current markets, including Canada, and to work to grow the game of poker globally.”

Despite these assurances, Amaya is a Canadian-based company and Canadian police haven’t been shy about taking down any and all Canadian-based non-governmental online gambling operations. Bottom line, Amaya will have little choice but to eventually pull its new brands from the Canadian market or Baazov will be engineering his next blockbuster deal from a Quebec prison. Meanwhile, all those US poker pros who relocated to Canada in order to play on Stars post-Black Friday may want to start checking out time-shares in Mexico.