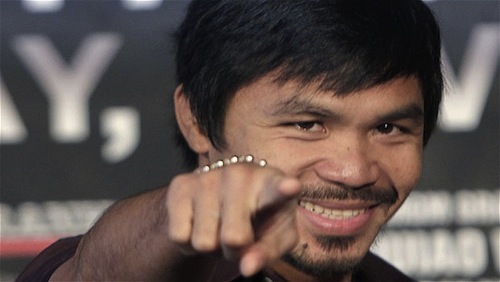 The PBA, long hailed as the oldest professional basketball league in Asia. Three new teams will be joining in time for its 40th season this October. One of those teams is Kia (Korean automaker) and its head coach is none other than Manny Pacquiao.

If your head’s still spinning, we won’t take it against you. Just let us know if you’ve had the time to digest this news.

Like everybody else, rumors of Pacquiao’s interest in becoming a head coach in the PBA have been bubbling into the surface for a few weeks now. But when a press conference was scheduled to formally announce it, that’s when things took a real turn to insanity.

We like Manny Pacquiao, and he’s a really, really good dude. But a head coach in a professional basketball league? Really? Boxing, politics, singing, acting, and Lord-knows-what-other-things-he-does aren’t enough for this guy now?

If anybody can get a chance to watch the press conference in YouTube, by all means take the time to do it. There he was, the greatest Filipino boxer in history, sitting comfortably and wearing a red and white Kia varsity jacket with the words Pacquiao and Head Coach neatly emblazoned in the right chest area. He also wore a matching cap, which made him look like a drafted basketball player instead of a head coach.

The sheer absurdity of all this has a circus-like feel to it, the kind that you know usually doesn’t end too well for the act. This isn’t boxing, Manny. This isn’t your platform. You’re the circus clown being paraded in front of everybody because you have the name and recognition to pull in casual basketball fans. Not a good look, Manny.

Juggling boxing and politics is hard enough on its own but tacking another responsibility that requires 24/7 attention on top of what he already has on his plate is asking for trouble. Hell, we don’t even know if he can coach, other than his stint as owner/coach/star player of the MP GenSan Warriors that played in the now defunct Liga Pilipinas.

But in the end, none of this bloating will change the surreal fact that Manny Pacquiao, he of the eight-division champion in boxing and incumbent congressman in the Philippines, is now a head coach in Asia’s oldest professional basketball league.

To borrow a common quote from today’s generation—there’s an acronym for that.
Damn right there is, and it spelled W-T-F.