Home / Sports / Enjoy Manny Pacquiao while you still can 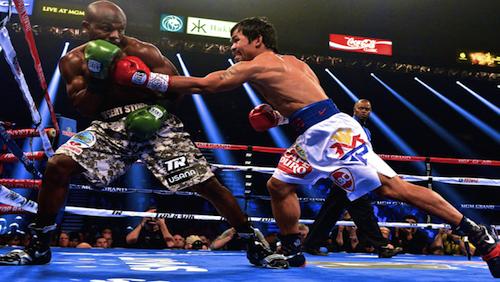 Manny Pacquiao proved two things during his decisive unanimous decision win over Timothy Bradley. He proved that he’s still an elite fighter, capable of dancing around opponents and relentlessly peppering them with stinging punches. On the flip side, he also proved that those same punches don’t have the kind of demented power they used to.

Whether you believe one or the other, or maybe even acquiesce to both statements, it’s evident that this isn’t the same PacMan who chomped through the competition five years ago, viciously destroying one elite fighter after another on his way to winning eight titles in eight divisions.

But this version of Pacquiao is still all-world by any measure of a prized pugilist. It’s just that when you watch him now, those same electric standards you held him in the highest regard back then isn’t there anymore. And really, if you think about it, that’s not really a bad thing.

At least not when you look at the rest of the boxing landscape.

Granted, there are a lot of young fighters that have shown their capabilities in putting on a boxing slugfest that would make the Ray Leonards, Muhammad Alis, and Mike Tysons of the world proud. But very few of those fighters carry the same commercial and mainstream cache as Pacquaio.

Ever heard of Ruslan Provodnikov? Or Adonis Stevenson? Or hell, has anybody ever seen Tyson Fury fight?

All three are arguably three of the most exciting fighters in the sport today. But ask a casual somebody anywhere if they’re familiar with any of these guys and they’ll probably think that Tyson Fury is a fictitious character from the world of Street Fighter.

Not a bad guess, but wrong nevertheless.

That’s why Manny Pacquiao, dwindling power and all, is still a one-of-a-kind attraction in boxing.

Who cares if he doesn’t have that power that knocked Ricky Hatton back to obesity, or that blazing hand speed that reconfigured Miguel Cotto’s face?

What we still have, as Pacquiao showed in his dominate win over Bradley, is a fighter that can still give us those heart-stopping moments of electricity the likes of which no other fighter in the sport is capable of. Floyd Mayweather Jr. is the best in the business, and there’s no denying that. But outside of the first half of the Miguel Cotto fight, when was the last time he was in a fight that brought people to their feet?

Mayweather can take his spot as the best pound-for-pound fighter in the world. No one with any semblance of sanity would argue that. But his style of dominance, while effective, isn’t exactly, shall I say, “fan-friendly”. Ask anybody who put money down to buy the Alvarez fight if they wanted a refund after seeing it and probably 90 percent would say “yes”. This isn’t a knock on Floyd; it’s a back-handed indictment of his otherworldly skills.

That’s where Pacquiao will always be favored over Mayweather. He may not have the skills of Money, but as far as giving fans their money’s worth, Pacquiao still has no equal.

So as he enters the twilight of his career, it’s important for casual and boxing fans to hold on to what they stillhave until it’s forever taken away. That day is coming sooner than we think. So in preparation for his inevitable face-off with Father Time, we all need to sit back, look forward, and appreciate the remaining times Manny Pacquiao will enter a boxing ring.

Those halcyon days of knocking out everybody in his path may be gone, but the man can still pull out an exciting fight, even when he himself gets knocked out cold.

So enjoy Manny Pacquiao while you still can because once he retires, we’ll never see anybody quite like him again.