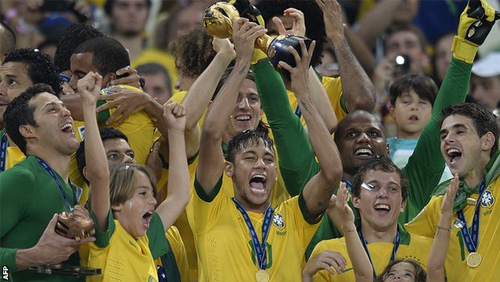 We’ve kicked around odds for the Golden Boot winner, won in top scorer of the World Cup. Now we’re taking a look at the awards FIFA gives out to players and teams after the tournament.

First up is the Golden Ball Award, given to the MVP of the tournament, not to be confused with the Golden Boot which is presented to the top goal scorer. Messi and Neymar share top-billing at 7/1 odds apiece. Other notable options are Cristiano Ronaldo at 12/1, Sergio Kun Aguero at 20/1, Andres Iniesta at 24/1 and Luis Suarez at 25/1. Interestingly enough, the 2010 Golden Ball winner, Diego Forlan, has 100/1 odds to repeat as the Player of the Tournament. It doesn’t exactly invite a lot of confidence, does it?

Goalkeepers aren’t left out of all the fun. The Golden Glove Award, given to the top goalkeeper, was first awarded in 1994. This year, Brazil’s Julio Cesar is the short favorite at 4/1 odds over Germany’s Manuel Neuer and Spain’s Iker Casillas, both at 6/1 odds. Moving down the list you have Argentina’s Sergio Romero at 7/1, Italy’s Gianluigi Buffon at 10/1, Belgium’s Thibault Courtois at 12/1, France’s Hugo Lloris at 16/1 and of course, England’s Joe Hart at 20/1 odds. We don’t really know what constitutes as entertainment but FIFA awards such a thing at the World Cup, and in its current format—the winner is determined by public vote that is why Brazil leads the pack at 2/1 odds, followed by Argentina at 4/1. Germany sits third at 11/2 odds and then there’s Spain at 6/1 odds. If you’ve got your eyes on a long shot, you can take a shot at Portugal at 20/1, Belgium at 33/1 or England at 40/1.

Finally, we have the Young Player of the Tournament Award. This award is given to any 21 and under player who made the best impression in the tournament. The odds on favorite to win this is Italy’s Paul Pogba at 5/2 odds, followed by Belgium’s Romelu Lukaku at 4/1, England’s Raheem Sterlin at 8/1, France’s Rafael Varane at 8/1, and Germany’s Julian Draxler at 10/1. Some other interesting choices are England’s Ross Barkley and Belgium’s Adnan Januzaj at 20/1.