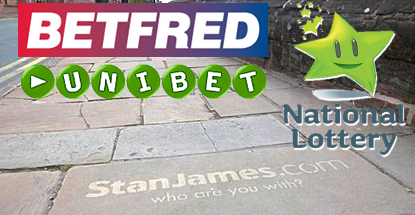 CHESTER OBJECTS TO BEING SCRUBBED BY STAN JAMES
Would Unibet’s desire to stand out from the crowd prompt it to go as far as to deface a heritage site? That was the accusation leveled against UK bookmakers Stan James by Cheshire West council after the company’s website was stenciled on flagstones lining the Roman-era walls of Chester. Just in time for the Chester Cup racing festival – of which Stan James is a sponsor — passersby discovered graffiti featuring the bookies’ domain name along with the phrase ‘Who are you with?’

‘Who are you fucking with’ might have been a better question. As news of the graffiti spread, panties were bunched, police were called and Racing Post bloggers referred to the stunt as “rather disrespectful.” Company reps apologized to anyone who took offense but insisted that the “clean graffiti” was made by pressure washing dirt from the stones and that the illuminating effect would vanish within a couple weeks, restoring Chester to its traditionally filthy state.

IRISH NATIONAL LOTTERY ENLISTS GURU’S HELP IN FIRST ONLINE ADS
Ireland’s National Lottery has launched its first ad campaign aimed at boosting its lagging online sales. Only around 3% of players currently use the National Lottery’s website to buy tickets and play instant games, but the goal is to push this number up to 15%, on par with other European online lottery stats. Lottery boss Dermot Griffin told the Irish Times that the online sales were intended to appeal to “occasional players” who don’t make a habit of making it to a retail point of sale.

Creative agency DDFH&B cooked up the television campaign, which features a balding git called ‘The Guru’ who claims the ability to pick winning numbers while meditating from his perch atop a mountain range in County Kerry. A player scales the mountain in search of lottery enlightenment, only to have the Guru tell him that there’s no point in revealing the winning numbers because the player won’t have time to make it to a retailer before the draw. At which point the player whips out his smartphone, leaving the Guru scrambling for another excuse not to expose himself as a fraud.

BETFRED GIVE MOBILE CASINO PLAYERS THE FINGER
UK bookies Betfred have launched a new marketing drive to pimp their mobile casino and slots offering. The push is being handled by Manchester’s BJL agency, the folks behind the £10m ‘You’ll love a bit of Betfred” rebranding that launched last fall. The new “Have more fun with your fingers” campaign is set to bombard viewers via television, online, social media and retail channels for the next six months. BJL creative director Tom Richards said the goal was to bring “a humal element to mobile gaming” and to remind viewers that “smartphones would be nothing without fingers.” Like the big middle one Betfred sticks out at the very end of this 30-second spot…