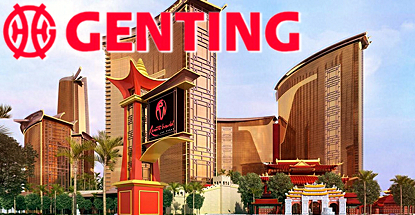 The Singapore-based subsidiary of Malaysian conglomerate Genting Bhd saw profit leap 77% in the first three months of 2014. Genting Singapore’s net income hit S$257.6m (US $206.3m) as revenue rose 24% to S$828.8m and earnings surged 60% to S$400.3m. The company, which operates the Resorts World Sentosa integrated resort, said the stellar numbers were the result of higher VIP wagering volume and improved hold rates. Gaming revenue was up 29% to S$672m while non-gaming revenue rose 6% to S$156.4m.

In February, Genting Singapore announced a $2.2b joint venture with Chinese property firm Landing International Development to build Resorts World Jeju in South Korea. Like every other casino outfit on the planet, the company is eyeing potential opportunities in Japan. Parent outfit Genting Bhd. is also eyeing further opportunities in North America, and its plans to build the $4b Resorts World Las Vegas project on the site of the stalled Echelon development came up for discussion with Nevada gaming regulators on Wednesday.

The global reach of Genting’s gaming operations – in addition to Singapore, it operates casinos in Malaysia, London, New York, the Bahamas, Manila and also boasts an Alderney-licensed online casino – prompted what the Las Vegas Review-Journal’s Howard Stutz estimated may have been the most expensive suitability probe yet undertaken by the Nevada Gaming Control Board.

Wednesday’s hearing saw Genting officials tell the GCB that, with $5b cash on hand and only $3b in debt, funding their Vegas project won’t be a problem. Once complete, the project would feature a two-level casino offering 3.5k gaming positions plus race and sportsbooks. Genting’s US quarterback Christian Goode said “no junkets” would be driving VIP gamblers to Genting’s Vegas digs.

Non-gaming attractions would include a 4k-seat theater, retail shopping areas designed to look like a Chinese village, a 58-foot-high aquarium stocked with exotic fish, a rooftop observation deck with an infinity pool plus three hotel towers offering a total of 3k rooms. Future phases on the 87-acre site may include a theme park like the one the company is adding to its Malaysian property. There will also be large LED screens adorning the building’s exterior onto which guests can upload selfies. This last item prompted one board member to clarify that Genting would be prescreening these photos to ensure nothing salacious got uploaded.

Board members had a few questions regarding some of the fines Singapore’s Casino Regulatory Authority (CRA) has levied against Resorts World Sentosa, but Genting reps assured the GCB it had changed its compliance procedures to address the CRA’s concerns. In the end, the GCB declared Genting a suitable new addition to the Vegas casino world, leaving only an okay from the Nevada Gaming Commission on May 22 to clear the way for Genting to apply for a state gaming license.