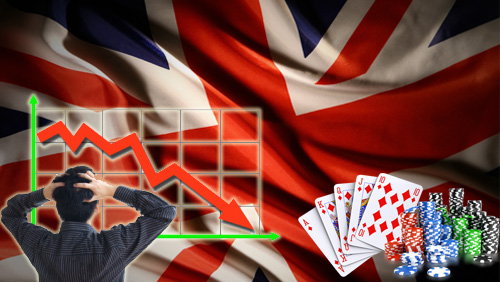 Some of the biggest UK hedge fund managers believe the future is not so bright for the countries bookmakers as they continue to take up short positions on gambling stocks.

Do you have a penchant for stocks and shares, or is the whole thing as confusing as Pythagoras theorem?

Well I will try and simplify matters for you.

Some of the most respected hedge fund managers in the UK are wagering their funds that the shares prices of the British bookmakers will fall as a result of the government’s insistence on tightening the taxation collar.

William Hill is the market leader in the UK, and a part of the FTSE 100 index of leading British stocks, and despite continued poor performances Ladbrokes remains in the number two slot.

When a hedge fund decides to take up a short position on a stock they essentially borrow stocks with a falling share price, hoping to then sell it, and then buy it back with the intention of returning it to the lender at a lower price.

It’s all about the continued noise surrounding Fixed Odds Betting Terminals (FOBTs) and the additional taxation of the gambling industry.

The announcement was nowhere near as frightening as some quarters of the gambling industry expected, and indeed the share price of Ladbrokes actually rose 7% on the back of the announcement.

Grant confirmed that the government would force betting shops to file a planning application if they chose to move into premises formerly owned by banks, building societies or estate agents, or if restaurants or pubs wanted to convert their premises into betting shops. A move that comes at a time where the UK bookmaker is making a wholesale cull of its brick and mortar establishments.

The anticipated reduction in the maximum £100 wagering limit on FOBTs also failed to materialize with Grant saying that their preferred approach would be to create a scheme that focused on the management of the stakes that people played with such as a pre-funded accounts.

Yet despite the rather lenient report, the hedge fund managers believe there is more agony to come for the UK Bookmaker.

Odey Asset Management disclosed a short position equal to 0.64% of shares in Ladbrokes, and Bluecrest disclosed a 0.6% bet against the bookmaker at the same time.

Marshall Wace disclosed a 0.54% short position at Hills, and BlackRock did likewise when they shorted at 0.69%.

I am dying to put a ‘greed is good line’ in here but I’m just not talented enough.

Simon Colvin, an analyst at Markit, a global provider of financial information services, told the Financial Times: “UK bookmakers have been living on borrowed time for the last 13 years, thanks to the advent of the fixed odds betting terminal.”

The increase on FOBT tax is likely to cost the UK gambling industry an estimated £75m when it kicks in next March, and the Point of Consumption (POC) tax is also going to add a further £300m to the cost end of the UK bookies balance sheets.

Markit said that demand to borrow William Hill’s shares made it the 17th most shorted company on the FTSE 100.