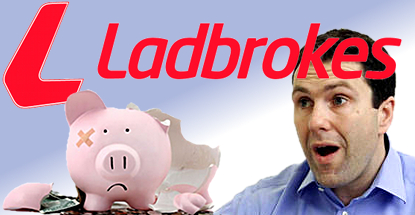 UK bookies Ladbrokes took a pummeling in its Q1 interim management statement thanks to unfavorable betting results and continued weakness in its online operations. Group revenue fell 2.3% as the company dealt with “heavy losses on football and horses,” the same factors rival William Hill cited for dragging down its own Q1 figures. Lads reported an operating profit of £18.4m, consistent with guidance it issued in February but less than half the figure earned in the same period last year.

Stripping out the addition of the Betdaq betting exchange and Lads’ recent Australian acquisitions, Lads’ online revenue was beaten bloody in Q1. Despite a 24.2% rise in betting handle, sportsbook revenue fell 17.9% as margins slipped 3.2 points to 6.4%. Online gaming revenue fared no better, down 17.7%. Things were slightly rosier on a sequential basis, with sportsbook revenue up 2.2% but gaming revenue fell 10.1%.

Lads’ mobile betting offered a ray of hope, with active customers up 32% and amounts staked up 95% thanks to the December addition of Playtech‘s Mobenga platform. While omitting any specifics, Lads says desktop sports betting “showed continued signs of stabilization”. The gaming vertical will likely get a boost in Q2 thanks to the March 27 launch of Lads’s new Playtech Casino product. On Tuesday, Lads went offline for 12 hours in order to install its new Information Management Solution (IMS), the Playtech platform that allows users to utilize a single wallet across all betting verticals.

Despite the pummeling, CEO Richard Glynn (pictured) insisted the company was well positioned to take advantage of this summer’s FIFA World Cup betting bonanza. With the IMS implementation accomplished, Lads now has everything in place “to drive growth in H2 and beyond.” Glynn said the company now had the confidence to unleash its Israel-based marketing team to ensure “a strong cross-product and cross-channel competition going into the World Cup.”