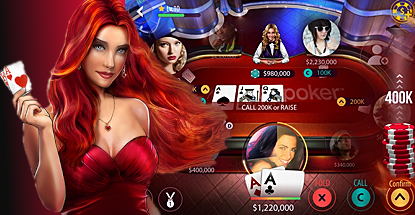 Social gamers Zynga have tapped former Best Buy exec David Lee as their new chief financial officer. Lee, who replaces the outgoing Mark Vranesh, will assume his new role on April 14. Zynga CEO Don Mattrick said Lee had experience in helping to turn troubled companies around and Zynga could well use the help. Zynga’s shares closed out Friday’s trading at $4.07, nearly twice their historic lows of $2.10 in November 2012, but still only 40% of the company’s December 2011 IPO price. Zynga is set to unveil its latest quarterly earnings report on April 23.

Zynga’s executive ranks aren’t the only thing getting a makeover. The company announced this month that its marquee Zynga Poker product was going under the knife. The promised tweaks include “smarter betting controls, large hole cards, improved player pictures and a fully redesigned poker table and environment.” You’ll also get chips that are “fun to interact with (and even touch on a mobile device) when you want to raise or go all-in.” Zynga is promising to preview the new poker features over the coming weeks.

Zynga’s other breadwinner, Farmville 2, is also undergoing something of an evolution. A Farmville 2 slot has been added to Zynga’s Hit It Rich: Casino Slots title. The slot features the same animals and crops Farmville 2 players have come to know and love (for whatever reason) and marks the first time the crop-growing moneymaker has migrated into the social casino sphere. AppData’s latest stats show Hit It Rich having 1.9m monthly active users on Facebook. A mobile version is planned for later this year.