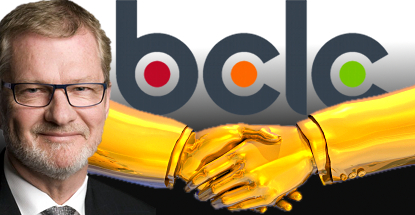 The British Columbia Lottery Corporation is coming under renewed fire for alleged money laundering occurring at the province’s 17 casinos. Government reports obtained by CTV News revealed that the number of suspicious transactions at casinos operating under BCLC’s oversight totaled 1,013 in 2013, more than twice the number recorded just three years ago.

Despite this increase, not one of the suspicious transactions has resulted in a criminal charge being laid. Former casino worker Jason Feng said the standard penalty for individuals believed to be engaging in money laundering attempts was to bar the individual from the casino premises – for two whole weeks.

The transaction reports make for great reading. A 2012 incident involved a “Mr. F” entering a casino’s VIP room lugging a backpack containing $200k in $20 bills. This same Mr. F once brought in $1.6m in cash into the same casino within a single month. Similar antics by a “Mr. C” resulted in him being barred from the casino but he was subsequently welcomed back to the River Rock casino in Richmond carrying a bag containing over $100k in cash.

The Great Canadian Gaming Corporation is responsible for day-to-day management of the River Rock casino and eight other gaming joints in the province, but BCLC’s self-described mandate is to “put policies and procedures in place so that standards are met and maintained … We have extensive casino security and compliance programs dedicated to complying with the federal and provincial regulations and laws governing our industry.”

Despite this dedication, BCLC – which earns the province around $1b in annual revenue – has a history of confusing compliance with complicity. In September, an audit by the province’s Gaming Policy Enforcement Branch determined that BCLC was underreporting large cash transactions at its casinos. Similar complaints by the federal FINTRAC watchdog have been laid at BCLC’s door for going on five years now but BCLC continues to insist that the regulations need further clarification before it will adjust its practices.

FUROR OVER GRAYDON’S GOLDEN HANDSHAKE
Meanwhile, the recent resignation of former BCLC CEO Michael Graydon continues to generate negative headlines. Graydon announced his exit in late January, then one week later announced he’d taken a job with a subsidiary of Paragon Gaming that is in the process of developing a new casino in downtown Vancouver. Graydon’s resignation came just two weeks after the province announced it was auditing the crown corporation’s operations, including executive compensation, to make sure taxpayers were getting good value for their money.

Opposition politicians are now questioning why Graydon received a severance package worth some $125k in salary, bonus and vacation payments. New Democratic Party MLA Shane Simpson noted that government employees aren’t technically entitled to severance when they quit their jobs, yet Graydon was paid some $50k in salary for February and March despite having already started his new private sector job. Graydon was even allowed to keep his government-issued laptop, iPad and phone. Meanwhile, BCLC announced this month that it was cutting 7% of its rank and file employees in order to keep a lid on costs.

Emails obtained by the NDP indicate that Finance Minister Mike de Jong signed off on Graydon’s golden handshake. In response to the outcry, de Jong told the legislature that according to his information, “proper guidelines were followed.” BCLC issued a statement saying Graydon had originally offered to stay at his post until March 31 but the BCLC board opted to let him go as of Feb. 4 and install an interim CEO.

Simpson also took issue with Graydon’s new gig, given the amount of sensitive info Graydon would have amassed on Paragon’s competitors during his time at BCLC’s helm. Simpson noted that government rules traditionally call for a one-year ‘cooling off’ period before high-ranking officials could join a company with which they’d had direct dealings during their time on the public payroll. “Apparently, the Lotttery Corp. operates under a different set of rules … And that’s a problem.”