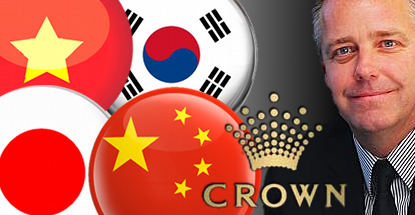 James Packer, boss of Australian casino operator Crown Resorts Ltd., has asked his country’s government to revise their tourist visa policies to make it easier for Chinese high rollers to visit his casinos. Packer told the Herald Sun that it was “hypocritical” for the government to maintain visa requirements that make it harder for wealthy Chinese to enter the country than wealthy Americans.

Packer, who believes the rising clout of Chinese consumers will “profoundly aspect every aspect of our economy,” said it was “stupid” that “visa applications are done in English, not Mandarin.” Packer also complained that Australia allowed residents of over 70 countries to apply for visas online but not residents from China. “We’re not in a Cold War anymore. The dollar’s at 91 cents because of China, not America, and we all benefit, so let’s not be hypocrites.”

Meanwhile, Packer’s international joint venture with Melco International Development is eyeing further expansion abroad. Melco Crown Entertainment already has a lucrative presence in Macau, is scheduled to open its City of Dreams Manila property in the Philippines later this year and is now eyeing expansion into Japan, South Korea and Vietnam.

Todd Nisbet (pictured), Crown’s exec VP of strategy and development, told the Australian that Melco Crown was in talks with several Japanese companies regarding a tandem bid on a casino. While acknowledging that “nothing has solidified yet,” Nisbet said “a local partner is a key ingredient.” That contrasts sharply with the position taken by Las Vegas Sands, who have made no secret of their desire to go it alone in Japan, a stance that has reportedly irked some Japanese lawmakers, who want to ensure local involvement in any casino projects.

Nisbet said Melco International boss Lawrence Ho, who holds a two-thirds stake in Melco Crown, was highly regarded across Asia and would be an asset to the company’s Japanese aspirations. Nisbet said Crown’s solid financial footing and its history of reinvesting in its properties would also help distinguish it from the herd of bidders. “We have an incredibly successful business both in Australia and abroad. We are financially sound … It is well within our means.”

In Vietnam, Nisbet says the government is coming around to the idea that continuing to forbid local residents from entering casinos is preventing the country from attracting top developers. “They are making a reassessment and moving forward.” Nisbet recently paid a visit to South Korea and said both Crown and Melco Crown would consider opportunities together before deciding whether to pursue projects individually or as part of the joint venture.

As for Crown’s oft-delayed project in Sri Lanka, Nisbet insisted “it is not a matter of if, it is when” and expressed hope that “things will be finalized by the end of the year.” Nisbet said the slow pace of the Sri Lanka negotiations was a good benchmark for how Crown viewed Asian expansion. “My first visit to Sri Lanka was two years ago. That is okay with us. This isn’t a foot race.”