Live Tournament Round Up: Wins for Laurence Houghton and Patrick Mahoney 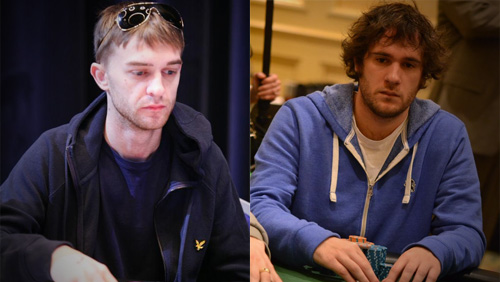 Laurence Houghton has capped off a quite amazing few weeks after following up on the birth of his baby girl with victory at the WPT National Series event in London.

Mitchell would meet his demise in a three way all-in holding [Kd] [Qs] against the pocket fours of Steve Owens and [Ad] [Ks] of Gareth Holt. Holt flopped an ace to take the lead, but Owens would river a wheel draw to send the dangerous Mitchell for an early shower in ninth.

Chattha would have to settle for a fourth place finish and when the end came it was a tearjerker.

Chattha getting it in good against Arvin Ravindran on [Ah] [Th] [4s] [Kc] holding pocket kings for the set against Ravindran holding [Ad] [4h] for two pair, only to see a third ace hit the river to send the unfortunate Chattha out for a £9,300 consolation prize.

Laurence Houghton would end the hopes of Darren Holt in third place to set up a heads up contest against Ravindran with chip stacks fairly even.

Patrick Mahoney is Victorious in Perth

Patrick Mahoney has netted his third six figure score of his career after winning the A$2,200 ANZPT Main Event in Perth for $108,307.

Mahoney outlasted a final table that contained seven Australians and one fellow American to capture the crown and first prize that now takes him over $530,000 in live tournament earnings.

Mahoney took the title after defeating Dean Blatt in heads-up action after over turning a 2:1 chip deficit at the Crown Casino in Perth.

The final hand seeing both players getting it in on a flop of [Jd] [6c] [3d] with Blatt holding [7d] [6d] for middle pin and the flush draw, against [Kh] [Js] for top pair for Mahoney. The [Jc] on the turn gave Mahoney two pair, before the [Ks] sounded the death knell with a full house for Mahoney and Blatt had to make do with A$86,100 for his runner-up spot.

534 players arrived at the Commerce Casino to participate in one of the hotly anticipated events on the tour, and Blackman is the early favorite to land the $1m first prize.

Silver will start the contest third in chips behind Robert Sturman and Kevin Killeen, and he must be the favorite to land the title he first won back in 2010. In fact, this is Silvers third UKIPT Dublin final table after finishing fourth in 2011.

Silver lost out to Joeri Zandvliet in that 2011 final table and incredibly the Dutchman also makes the 2014 final table with over 1.3m in chips.