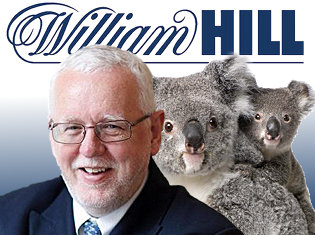 UK bookies William Hill released their official 2013 report card on Friday, broadly matching the trading update they provided in January. Revenue rose 18% to £1.48b, with retail revenue up 10% to £907m and online rising 12% to £446.3m. Operating profit rose 3% to £335m, 48% of which came via online and Hills’ Australian operations.

Sports betting was an online star for Hills, with handle rising 33% and revenue up 29% to £212.9m. In-play betting accounted for 41% of online sportsbook handle. Casino revenue grew 1% to £191m but bingo fell 2% to £24.2m and poker dropped 9% to £18.2m. Mobile gaming revenue was up 175% with mobile now accounting for 39% of all sportsbook wagers. William Hill Online’s unique active player ranks rose 32% while new accounts were up 7%.

While the UK, Italy and Spain markets accounted for 81% of Hills’ overall revenue, CEO Ralph Topping (pictured) referred to Australia as Hills’ “second home” following the 2013 acquisitions of the Australian Sportingbet/Centrebet brands and TomWaterhouse.com. The increased presence boosted Hills’ Australian operating profit 79% to £12m. Hills continues to shift its marketing mix from offline to online, which is helping drive down cost per acquisition. Topping confirmed the March launch of a revamped Sportingbet site as well as the imminent migration of TomWaterhouse.com to the William Hill Australia platform.

Hills’ US division achieved profitability in its first full year of operations under the Hills banner, contributing £4.6m in operating profit thanks to a 47% rise in handle. Mobile wagering in Nevada accounted for 31% of William Hill US’ handle, up from 16% in 2012. Hills’ share of Italy‘s online sportsbook and casino market increased to 7% and 8% respectively and Hills is the third-biggest online sportsbook in Spain with a 15% market share. Hills is embarking on a new TV ad campaign in Italy and Spain to raise its profile ahead of this summer’s FIFA World Cup. International markets now account for 15% of Hills’ overall revenue, up from 9% in 2012 and Hills hopes to boost the international revenue share to 35-40% by the end of 2017.

Looking forward, Hills is planning cost-cutting measures totaling between £15m-£20m to help it deal with the imposition of the new point-of-consumption tax (POCT) that kicks in this December. Hills’ finance director Neil Cooper suggested the annual damage inflicted via the POCT will range from £60m to £70m but Topping suggested the change would hit Hills’ competitors even harder, allowing Hills to “take more market share as a result.” Topping also took pains to point out that, despite rumours to the contrary, he would be staying on as CEO until the end of 2015 as planned.