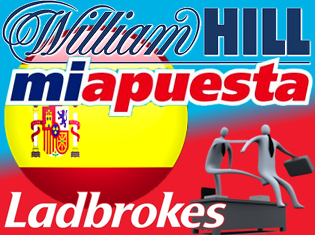 UK bookies William Hill have completed their takeover of Miapuesta, the Spanish-facing gambling operation Hills acquired as part of its £459.4m acquisition of Sportingbet earlier this year. As part of that deal, Hills received a six-month option to take over the Miapuesta business and Hills CEO Ralph Topping confirmed last month that investors “should assume we will exercise” that option before it expired in September.

The Miapuesta site now features a banner declaring “Now we are becoming more.” (So much better than Hills’ original choice from the Bhagavad-Gita: “Now I am become death, the destroyer of worlds.”) Assuming they survive Lord Vishnu’s wrath, Miapuesta players are invited to register with Hills, with the added carrot of a €100 welcome bonus and a €50 free wager. Hills estimates the combined share of its own Spanish-facing operations and the Miapuesta brand comes to 23% of Spain’s total gambling market, while Q1 figures from the Spanish gaming regulator put the two companies’ combined share of the country’s sports betting market at around 13%.

LADS’ LATEST LAYOFFS
Hills’ UK rivals Ladbrokes are planning the launch of their own Spanish-facing online business before year’s end. The partnership with local operator Cirsa will conduct business under the Sportium brand, which currently operates 600 or so retail outlets across the country. Sadly, that’s about where the similarities with Hills end, as the financially struggling Lads are reportedly preparing a new round of layoffs to help keep the ship afloat until the online tie-up with Playtech works its promised magic.

In May, Ladbrokes slashed around 100 online marketing and CRM positions as the company shifted much of its online focus to its new Ladbrokes Israel division (effectively, a rebranded Playtech CRM and marketing office that came ready-equipped with 40 employees). This latest round of cuts will reportedly target up to 75 positions in the human resources, IT and sportsbook trading departments at Lads’ head office in London. A source told eGaming Review that management has already begun asking targeted employees to justify their continued employment during a series of consultations taking place this week.