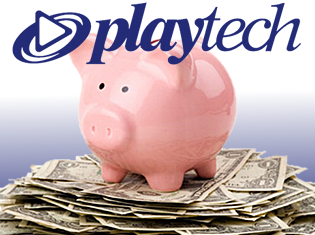 Online gambling software outfit Playtech delivered “an exceptional performance” in 2013, with revenue up 16% to €367.2m, earnings up 17% to €159.4m and profits up 26% to €148.3m. Throw in the hefty payday from Playtech’s sale of its share of the William Hill Online (WHO) joint venture and Playtech’s total profits came to €488.8m. The company declared a special dividend of £100m to up its total gifts to shareholders to a record €188.5m. Playtech shares rose nearly 6% on the day to close at 785p.

In keeping with recent tradition, Playtech’s struggling iPoker network was the sole declining vertical on the 2013 balance sheet, with revenue falling 18% to €14.7m. The company attributed much of the decline to the “secular weakness” of the overall online poker market, but noted that bored poker players indulging in Playtech’s casino side games added €6.2m to the casino vertical’s bottom line.

That casino vertical continued to earn the bulk (52%) of Playtech’s revenue, up 25% to €189.2m. Live dealer casino revenue rose 17% thanks to licensing deals with Paddy Power, Betfair and Ladbrokes and further growth is expected following January’s €3.5m acquisition of Euro Live Technologies, which operates a live dealer casino in Latvia.

Services revenue rose 5% to €111m, although like-for-like revenue fell 3% once you exclude the WHO factor. Bingo revenue rose 3% to €18.5m, while contributing a further €11.3m via casino side games. Videobet revenue was up 14% to €12.3m thanks to the placement of an additional 2,800 terminals in the UK, Puerto Rico and Mexico.

Sports betting revenue rose 61% to €17.1m, thanks to the launch of five sports betting licensees on the Geneity platform in 2013, including Gala Coral. Playtech’s Mobenga mobile gambling offshoot continued to impress, as mobile revenue increased 115% to €29.4m, outperforming all other channels last year in terms of growth. Mobile casino revenue rose even higher (212%) to €12.7m.

NOW WHAT?
Looking ahead, Playtech says trading over the first seven weeks of 2014 is up 15% year-on-year and up 4% from Q4 2013. The company ended 2013 with a cash balance of €527.4m, meaning it’s acquisition time, baby. Playtech chairman Alan Jackson, who replaced Roger Withers in October, said acquisitions have been berry berry good to Playtech, as reflected by the 350% rate of return on its WHO investment. Jackson said the company would put particular focus on regulated markets for any potential acquisitions, partnerships and joint ventures.

Playtech CEO Mor Weizer warned that this regulated market focus could have a short-term revenue impact. Playtech is currently cooperating with Italian gaming regulator AAMS in developing a joint program for unlicensed operators to either withdraw from the market “in an orderly fashion over the next four months” or to obtain a proper .it license and migrate players. Despite these short-term drawbacks, Weizer said dot-com operators remain important to Playtech’s growth strategy “as they provide the cornerstone in soon to be regulated markets.”

Playtech made its initial foray into social gaming in Q4 via the soft launch of its Wild Spin Casino on Facebook. The company expects a proper launch “in the coming months.”