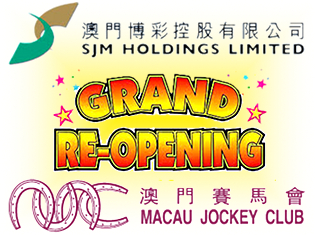 Macau casino operator SJM Holdings broke ground on its first property on Cotai on Wednesday. The company also announced the estimated cost of developing the Versailles-themed Lisboa Palace will top $3.9b, about $700m higher than previous estimates. SJM CEO Ambrose So said the increase was primarily due to rising labor and construction costs.

Balancing good news with bad, SJM learned this week that it wouldn’t be given a spot on the Hong Kong stock exchange’s benchmark Hang Seng Index. SJM rivals Sands China and Galaxy Entertainment Group have won promotion to the prestigious 50-member index over the past couple years.

SJM’s Macau operations include the Macau Jockey Club (MJC), which has been one of the few misfiring cylinders in Macau’s high-performance gaming engine. The ailing racing outfit recorded a loss of MOP 50m (US $6.2m) in 2013, MOP 10m better than 2012, while betting handle dipped around 5% to around MOP 2b. CEO Thomas Li Chu-kwan blamed the MJC’s continued woes on the forced closure of four of its seven off-track betting outlets to comply with the local government’s bid to expunge gaming from Macau’s residential areas. Ongoing infrastructure developments outside the track entrance are also cited for having “brought inconvenience to customers.”

However, help may be on the way via extra emphasis on online wagering, which saw revenue increase nearly 50% to MOP 155m last year. Plans are also afoot to reopen the MJC’s long-dormant casino floor, which hasn’t taken a wager in a decade (not coincidentally, the MJC hasn’t turned a profit since 2004). SJM has filed a request with Macau gaming regulators to transfer an unspecified number of precious gaming tables and electronic gaming machines from other SJM properties to the MJC casino. Macau regulators plan to inspect the dust-covered casino before considering whether to approve SJM’s proposal.