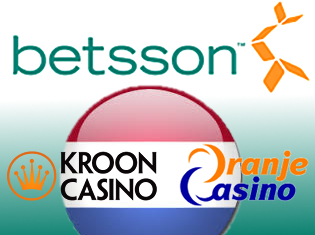 Swedish gambling operator Betsson AB has acquired Malta-licensed online gaming group Oranje and Kroon, which operates primarily Dutch-facing sites Oranje Casino and Kroon Casino. Betsson has agreed to an upfront payment of €40m in cash and €60m in Betsson shares. A further consideration of between €30m and €45m is expected, with the amount depending on how liberal the Netherlands’ liberalized online gambling market turns out to be – a riddle that isn’t expected to be solved until the Dutch finish implementing the necessary legislation by mid- to late-2015.

Betsson CEO Magnus Silfverberg said the acquisition would make his company “one of the biggest players on the Dutch market” and would bring Betsson’s profits from locally-regulated markets over 25% of the total. Last year, Oranje and Kroon recorded revenue of €32.5m and earnings of €22.1m from a customer base of 209k. In addition to the two sites, Betsson is also receiving over 300 domains, Kroon’s Belgian license and some bespoke casino games. The three individuals who founded Oranje and Kroon will continue to serve as external advisors to the operations. The acquisition is expected to close later this quarter.

Betsson set new records for both betting turnover and customer deposits in Q4, but B2C sportsbook margins fell from 7.5% to 5.5%, pushing profit down to SEK 79.1m from SEK 95m last year. B2B sportsbook margins fell from 2.8% to 2.5%, resulting in a SEK 3.3m year-on-year fall to SEK 67.2m. Casino gross profit rose 8% to SEK 364.1m, representing 66% of the total profit pie. Poker gross profit fell to SEK 25.4m from SEK 31.6m thanks to “continued decreased activity in poker networks” and the company having “terminated its cooperation with unprofitable customers.”

Total mobile revenue rose 16% from Q3 to SEK 80.9m. The launch of a new Betsson.com mobile product in Q2 boosted the brand’s mobile revenue 38% over Q3 and 733% over Q4 2012. Betsson garnered 85% of B2C revenue from Nordic countries, up from 82% last year. The increased Nordic emphasis is credited to the early 2013 acquisition of the Automaten sites from Cherry AB, which added SEK 36.7m to Betsson’s B2C column. Betsson also continues its efforts to provide technological assistance to a Chinese online lottery joint venture consisting of a private firm and a state-owned company. Betsson says it has “a positive view” of future possibilities in China.