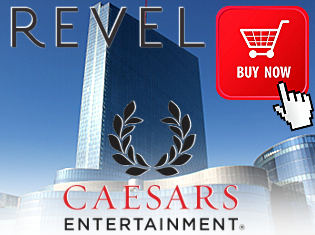 Full-time debt-servicing institution and occasional casino operator Caesars Entertainment is looking to acquire Atlantic City’s troubled Revel casino, according to a Bloomberg report. Companies have less than two weeks to submit bids to acquire Revel, but Bloomberg’s sources stressed that it was far from certain that Caesars would submit a bid for the property, which declared bankruptcy in March 2013, less than one year after the property opened with great fanfare the previous April.

In December, the New York Post reported that Hard Rock International was in “advanced negotiations” to purchase Revel. The Orlando-based Hard Rock had once intended to build its own AC casino but these plans were scrapped in September 2012 due to “current market conditions” in AC being, er, not good. Last year saw Atlantic City’s annual casino revenue slip to its lowest point in over three decades, laid low by increased competition in neighboring states.

If Bloomberg’s sources are correct and the deal goes through, the addition of Revel would bring Caesars’ Atlantic City holdings to five casinos – six, if you count the Atlantic Club Casino-Hotel that Caesars bought in December with the intention of closing it down to reduce local competition. The New Jersey Division of Gaming Enforcement (DGE) frowns upon “undue economic concentration” and Revel would add another 6.2% of AC’s total revenue pie to Caesars’ current 41%.

The DGE could compel Caesars to sell or shutter one of its four AC casinos – likely either the Showboat or Bally’s rather than the more profitable Caesars or Harrah’s properties, which perennially rank just behind Boyd Gaming/MGM Resorts‘ Borgata on the monthly revenue charts.

Even before it opened, the word ‘troubled’ was routinely associated with Revel. In 2010, investment bankers Morgan Stanley opted to write off nearly a billion dollars rather than invest another nickel in the casino-hotel’s construction. When it finally did open its doors two years later, the $2.4b Revel’s revolutionary smoke-free policy failed to attract the anticipated throngs of cancer-averse gamblers. Revel ditched the policy after emerging from bankruptcy protection in May 2013, but the crowds continued to stay away in droves. Revel ranked eighth out of 12 on both AC’s 2013 annual revenue chart as well as its December monthly figures.

It’s tempting to think that Caesars’ hedge fund owners have gone insane and are planning to buy every single AC casino and rename the town Caesarsville, but that’s probably just wishful thinking on our part. Speculation now turns to how much Caesars might end up paying for Revel, and where that money might come from. Caesars was only required to ante up $15m to acquire the Atlantic Club property, but Revel won’t go that cheap. But hey, it’s Caesars, whose long-term debt is the highest in the casino industry at around $24b. So just toss the Revel bill on the pile with the rest until it’s time for Caesars’ own bankruptcy proceedings in another year or so.