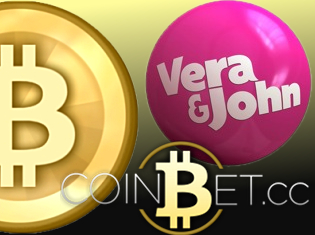 Scandinavia-based, Malta-licensed online casino Vera&John has added Bitcoin to its list of payment options, becoming one of the more mainstream online gambling sites to allow transactions using the increasingly popular virtual currency. Starting Tuesday, the site began accepting Bitcoin deposits, which are then converted to Euros (using real-time exchange rates) for online wagering activity. Subsequent withdrawals of any Bitcoin deposits must be made in Bitcoin.

To avoid any downside from Bitcoin’s notoriously volatile valuation, Vera&John doesn’t intend to hold any Bitcoins on the site. Vera&John has teamed with Erik Voorhees’ payment processing outfit Coinapult to process its Bitcoin transactions. A Vera&John spokesman told the BitcoinTalk forum that deposits are instant, but the company’s Malta license requires it to manually review every withdrawal request, a process the company says ordinarily takes between four to 10 hours. But once the request is approved, the withdrawal takes only as long as it would for any Bitcoin transaction to be confirmed.

COINBET’S COINFUSING US STANCE
Vera&John doesn’t accept US customers, but Panama-based, Costa Rica-licensed CoinBet Interactive Gaming S.A. does. Or, at least, it appears to. The Coinbet.cc site has been using the media’s pre-Super Bowl betting hype to advertise its having “won the race to bring legal gambling back to the internet” for customers in the “underserved US market.” The company says its acceptance of US customers represents “a huge and disruptive move” and has even managed to get its logo onto the Reuters interactive billboard in New York’s Times Square.

The public assertions of Coinbet senior VP ‘John Bauer’ regarding the site’s legality appear to rest on the kind of advice famed Simpsons’ lawyer Lionel Hutz might provide. The site claims that, since Bitcoin has yet to be recognized “as a legitimate form of currency” by the US government, then “online gambling with Bitcoin is not an illegal event under the Wire Act or UIGEA.” Yet the site’s own terms and conditions states: *We do not accept deposits or wagers from the USA.” Confused yet? (Coinfused?)

Coinbet requires its customers provide only an email address in order to get the betting party started. Bitcoin deposits are converted to US dollars, euros or UK pounds, depending on the customer’s location, for wagering purposes. Coinbet’s .cc domain comes via the Cocos Islands, an Australian territory boasting a whopping 600 inhabitants. It was the domain provider of choice for UK technology martyr Richard O’Dwyer after US authorities seized the former TV Shack operator’s .net domain over charges of offering illegal downloads of US-copyrighted intellectual property.