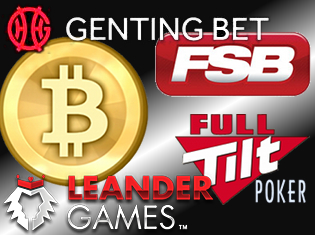 Seems more than a few companies opted to try new things as part of their new year’s resolutions. First up, Genting Alderney has added a sportsbook to its online offering courtesy of UK platform provider FSB Technology. The official launch of the Genting Bet online and mobile sportsbook follows the product’s soft-launch in October and is intended to further integrate Genting’s online offering with its 44 land-based casinos in the UK. Genting Alderney first dipped its toes into the sports betting waters last summer when it debuted an SBTech-powered sportsbook on the cruise liner ferrying passengers between Miami and Genting’s Resorts World Bimini in the Bahamas.

FSB Tech’s turnkey offering includes a live betting platform, real-time pricing models and CRM tools for player segmentation and bonusing. Genting Alderney managing director Peter Nolan said the launch would allow Genting customers to keep all their online and offline gaming needs under one umbrella. FSB Tech CEO David McDowell called the Genting deal “a fantastic opportunity and an amazing endorsement” for his fledgling firm, which completed its third round of funding earlier this year.

FULL TILT POKER TAP LEANDER GAMES FOR CASINO ROLLOUT
Also in the news for broadening its horizons is Full Tilt Poker (FTP), which recently unveiled a limited test rollout of some free-play online roulette and blackjack games. The site’s parent firm, Isle of Man-based Rational Group, has now confirmed a deal with third-party software supplier Leander Games to supply up to 25 casino games when FTP officially launches its real-money casino vertical this spring.

Leander CEO Steven Matsell said the companies had begun integration of Leander’s LeGa platform, which will eventually host Leander’s own content in addition to third-party games provided by Leander’s partners. Matsell said his staff were “incredibly proud” to have been emerged triumphant from the competitive bid process and were eager to take FTP into brave new worlds. Matsell called the tie-up a “landmark deal” for Leander that would take the company “from ‘new kid on the block’ to a serious contender.” Rational’s director of casino Sam Hobcraft logrolled right back, describing Leander as “the leader in a new generation of gaming platforms.”

BITCOIN MAKES LAS VEGAS DEBUT
The last of our intrepid explorers of uncharted territory can be found in downtown Las Vegas, where the D Casino and the Golden Gate casino officially began accepting Bitcoin as a payment option on Wednesday. For the time being, the two establishments will accept the virtual currency/commodity as coin of the realm at their front desks, gift shops and restaurants, but not on either joint’s gaming floor. Derek Stevens, who co-owns both casinos, told the Associated Press he had no idea how many patrons would opt to pay their tabs in Bitcoin, but viewed the experiment as “somewhat exciting” regardless.

Nevada Gaming Control Board chairman A.G. Burnett stressed that Bitcoins were unlikely to migrate to Vegas casino floors anytime soon, in part because “no licensee has approached me for considering its use.” Burnett said state regulators had been keeping a close eye on Bitcoin but had yet to achieve the “extremely high level of comfort” necessary to approve Bitcoin use on the state’s gaming floors.