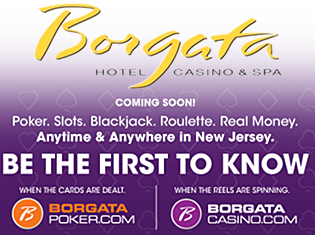 The operators of Atlantic City’s market-leading Borgata casino have become the latest to issue invitations to register for the commencement of New Jersey’s online gambling market on Nov. 26. The Borgata’s website is accepting signups so that players will “be the first to know when the excitement of the Borgata Casino comes online.” The announcement details two separate sites – BorgataPoker.com and BorgataCasino.com – and asks players to list whether they’re interested in poker, casino games or both. Last week, the CEO of Boyd Gaming – which shares ownership of the Borgata with MGM Resorts – confirmed that each Atlantic City casino granted an online gambling license would be eligible to operate up to five separate websites.

The Borgata’s online endeavor has partnered with European online gambling operator Bwin.party digital entertainment, which intends to launch its own PartyPoker-branded operation alongside the Borgata-branded sites (assuming Bwin.party’s application for a New Jersey online gaming license is approved). On Wednesday, Bwin.party announced it had burnished its offering by inking a casino games content deal with Canadian B2B supplier Amaya Gaming. Amaya CEO David Baazov said the deal would encompass both Bwin.party’s New Jersey-facing site and its existing operations in other markets. Amaya has inked similar deals with Caesars Entertainment’s four AC properties and will provide its Ongame online poker product to the Golden Nugget’s Bally Technologies-powered online site.

The deal with Bwin.party covers not only Amaya’s in-house product but third-party content as well. Amaya recently inked a deal to add content from land-based and online slot developer Leander Games, allowing operators powered by Amaya’s Casino Gaming system to offer all content on Leander’s LeGa platform without the need for additional integration. In addition to its in-house product, Leander’s portfolio includes titles from Blueprint, Genesis and Quickspin. Amaya’s portfolio, which includes third-party titles from the likes of Bally, SHFL Entertainment and Aristocrat, already tops over 250 games.