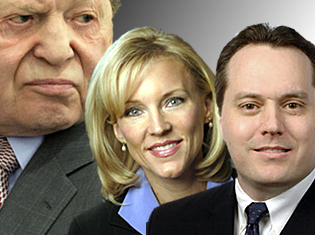 Apparently this is the month in which gambling advocates and their opponents take to the interwebz to make points, counterpoints and fling virtual poo at each other. We’ve already seen William Hill chairman Ralph Topping have a go at a lobbyist who thought he saw one of Hills’ fixed-odds betting terminals beat a puppy to death on the Tottenham Court Road. Clearly feeling left out, the Yanks have commenced their own verbal cage match. So, as Big John McCarthy is wont to say, let’s get it on!

The fun began a week ago, when Republican party operative and The Hill columnist Cheri Jacobus (pictured, centre) took time out from yelling ‘Benghazi’ in crowded theaters to launch a sustained social media campaign to warn the world that online gambling causes Obamacare. Jacobus repeatedly chastised various newspaper columnists for failing to report the contents of a letter written by Federal Bureau of Investigation deputy assistant director J Britt Johnson.

Written in September 2013 but only recently made public, Johnson’s letter was a response to a query by Bill Young, the former Florida GOP congressman who died in October. Young had sought the FBI’s thoughts on online gambling’s potential for money laundering and Johnson offered the opinion that money launderers “are resourceful and find innovative ways to exploit any medium to launder illicit funds.” Johnson noted that “even well-regulated entities” – including banks and brick-and-mortar casinos like Las Vegas Sands – “are commonly unwitting conduits for money laundering.” (And sometimes not so unwitting.) As such, Johnson offered the opinion that online gambling “may provide more opportunities” for money laundering.

In fact, there are more than 10 instances of the words “may,” “might” or “could” in Johnson’s letter. As in, Jacobus “could” be so eager to paint online gambling as a crucial plank of Al Qaeda’s fundraising efforts because Sands chairman Sheldon Adelson (pictured glaring on the left) has vowed to spend “whatever it takes” to stamp out online gambling, and Jacobus “might” be eager to collect some of that sweet, sweet rain in her social media bucket. Jacobus has publicly insisted that she’s not on Adelson’s payroll, although she’s eagerly redistributed every piece of public comment made by the Adelson-funded Coalition to Stop Internet Gambling (CSIG) and its cadre of retired politicos-for-hire.

Jacobus’ reign of error included demands for online gambling sites to prominently display the FBI’s warning and she called gambling reporters such as the Las Vegas Review-Journal’s Howard Stutz “mere PR hacks” for the online industry when they failed to amplify her demands quickly enough. Jacobus’ antics prompted pushback from Poker Players Alliance (PPA) exec Rich Muny (pictured, right), which led Jacobus to claim that it was “almost as if PPA wants to protect online cheaters among us rather than honest players.” (Actually, we think that’s directly lifted from the PPA’s charter.)

Muny responded by analyzing the ‘proof’ Jacobus had offered of online poker’s money laundering potential. This was provided by Jim Thackston, who Muny described as “a disgruntled programmer who couldn’t sell his product to industry.” Thackston runs a pro-prohibition site that includes case studies showing how easily collusion and chip-dumping could take place via a free-play poker site on Yahoo, because everyone recognizes that Yahoo is the most experienced and sophisticated online poker site in operation today. In fact, as Jacobus might observe, it’s almost as if Thackston could only prove his point if the security bar was set at its lowest possible level.

Muny challenged Thackston and Jacobus to repeat their “irrefutable” proof on one of New Jersey’s regulated online gambling sites, which the pair dodged by saying Muny was asking them to break the law to prove their point. Muny eventually suggested that Jacobus might be telling the truth as far as not currently receiving checks from Adelson, but that she definitely seemed to be “trolling” for some Adelbucks. The prolonged exchange got sufficiently heated that Stutz asked to be taken off the thread. Selecting ‘unfollow’ may temporarily shut out the noise, but one should expect the dissonance/disinformation to only get louder as the year gets older.