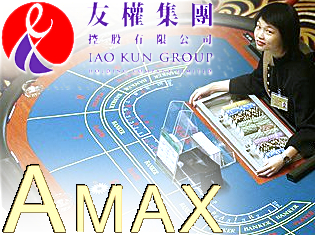 Struggling Macau casino junket investor Amax International Holdings Ltd. says it is owed HKD 468m (US $60m) from junket aggregator AMA International Ltd. Amax made the claim in a filing this week with the Hong Kong Stock Exchange, which also indicated that Amax lost HKD 16m ($2m) in the first half of its fiscal year ending Sept. 30. In August, Amax publicly expressed “significant doubt about the group’s ability to continue as a going concern” after reporting a $5m loss in its fiscal year ending March 31.

Amax explained their dire financial state as the result of “a series of unforeseeable and unfortunate events originated in the past few years.” Besides the the AMA International debt, Amax’s litany of woe includes the loss of 40 gaming tables it used to control at SJM Holdings’ sub-licensee Greek Mythology Casino and the scary attack on Amax chairman Ng Man Sun by hammer-wielding strangers late last year.

In a bid to keep alive some potentially positive news, Amax has once again extended the deadline for negotiating a deal to build a casino in Northern Cyprus. Talks with local partner Southern Ruby Ltd. were supposed to be completed by September, but were extended to the end of November and have now been extended again to Feb. 28. Southern Ruby holds exclusive rights to operate a casino in the Lara Park Hotel in the town of Gime.

IAO KUN GROUP’S Q4 SLUMP
Junket investor Iao Kun Group Holding (IKGH) said rolling chip turnover rose 19% in November to MOP 12b ($1.51b) but its win rate fell to 1.64%, well below the expected range of 2.7% to 3%. October’s win rate was also subpar, coming in at 2.27%. The company’s Q3 boasted an average 3.22% win rate, but the past two months’ performance resulted in an operating loss, leading the company to warn that it likely wouldn’t make previously announced full-year income forecasts. Through the first 11 months of 2013, IKGH’s rolling chip turnover is down 7% year-on-year. IKGH controls 40 gaming tables at five VIP rooms in Macau.

SANDS ASKS COURT TO EVICT JUNKET OPERATOR
Las Vegas Sands has asked a Macau court to help it evict a VIP gaming room operator for not paying the rent. Venetian Macau SA has asked the Court of First Instance to let them give the boot to junket operator Amuca (Macau) Sociedade Unipessoal Ltda, for what the casino claims is nonpayment of rent on a Sands Macao VIP room. Sands says the junketeer hasn’t made rent since October 2012 and the unpaid tab has topped HKD 450m ($58m). Sands also wants to collect interest on the debt. Amuca has been given 30 days to convince the court that the check is totally in the mail or GTFO.