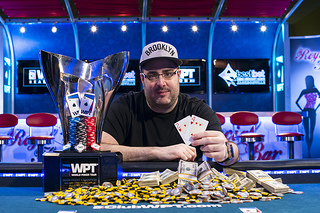 World Poker Tour bestbet Jacksonville Fall Poker Scramble has come to a close with Jared Jaffee $252,749 the richer, after defeating 357 other entrants to take the first major tournament title of his career. 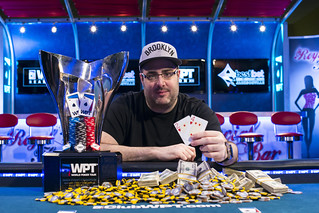 It took Jaffee just under 100 hands to wrest the title away from Blake Purvis after the pair clashed in heads-up action for the $252,749 first prize, and seat at the WPT World Championships at the Borgata in April.

Jaffee started with the chip lead and the gap between him and the other competitors just widened further when he was responsible for the exit of Johnny Price in sixth place.

Price opened to 90k from the cutoff, Jaffee three bet to 215k from the button, Price moved all in for 615k and Jaffee made the call.

It was pocket tens for Price, but Jaffee was dwarfing him with his pocket aces, and five community cards later Price was gone.

Jaffee would make it two on the spin when he eliminated Corrie Wunstel in fifth place. Michael Horchoff limped on the button, Corrie Wunstel moved all-in for a 1.1 million from the small blind, Jaffee called from the big blind and Horchoff folded to leave the two to tango. It was pocket nines for Jaffee, ace-jack for Wunstel and a nine on the river ended the tournament life of the latter.

Margo Costa’s appearance at the final table was the third appearance by a female in the past four WPT Main Event final tables, once again proving that the female presence in the game is growing each year; but we are still going to have to wait to crown our first female champion in an open event after Costa bowed out in fourth.

Blake Purvis opened to 180k from the cutoff and Margo Costa called from the button. The flop was [Qs] [4c] [3s], Purvis led for 225k and Costa moved all-in for 1.5m. Purvis called with pocket sevens and Costa tabled [Kh] [Th]. The turn and river steered clear of any upsets and Purvis started his pursuit of Jaffee.

Purvis would then bring the tie to a dead heat when he eliminated Michael Horchoff in third place. He raised to 120k from the button and then called a 820k jam by Horchoff from the small blind. It was [Jd] [8d] for Purvis, trailing slightly behind the [Kd] [7c] of Horchoff. A jack on the turn giving Purvis a pair and [8s] on the river making it two pair, and suddenly we were heads up.

Jaffee would soon overtake Purvis to take the chip lead before the pair played for stacks in the decisive hand that once again showed how narrow the margins are between success and failure in heads up poker.

It was [4h] [2h] for Jaffee to give him the baby flush draw, and pocket aces for Purvis. The [6c] maintained Purvis’s lead but the [Qh] gave Jaffee the flush, the top prize of $252,749, a place in the WPT World Championships and all the trappings that comes with being a member of the WPT Champions Club.

“You virtually went wire-to-wire at this final table. Was this win ever in doubt?” Asked the WPT’s Tony Dunst after the win.

“Yeah…when he turned over aces and I had to hit a heart there.” Said a triumphant Jaffee.