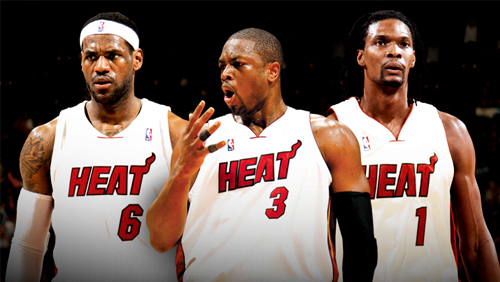 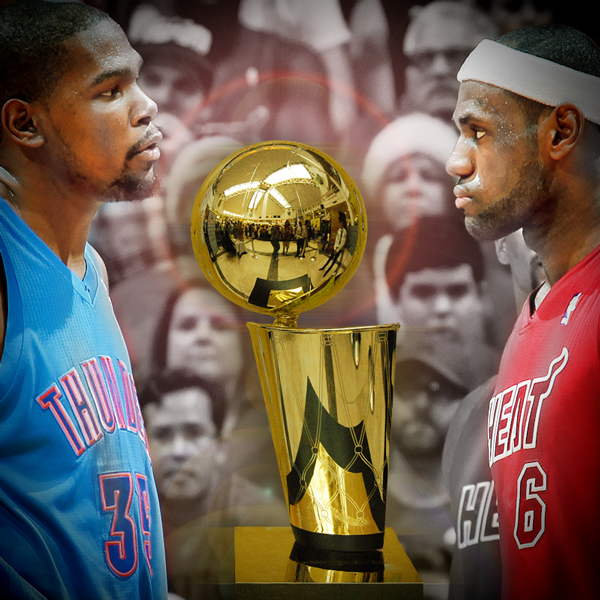 On the eve of the NBA’s anticipated tip-off to start the 2013-2014 season, a ton of teams are facing serious questions that could affect their championships. How much better is Derrick Rose after his 18-month layoff? How fast can Russell Westbrook come back to help Kevin Durant and the Oklahoma City Thunder? Will Kobe Bryant return to keep the Los Angeles Lakers relevant?

But of all those questions, the one that will get asked the most is this: Will the Miami Heat three-peat?

Well, if you ask sports books, that answer is a resounding “yes!”

The reigning champions are listed at 2/1 odds to win the 2013-2014 NBA championship, a line that’s head and shoulders above the rest of the league, even to the team that occupies the second favorite line: the 7/1 Oklahoma City Thunder.

Much of the Heat’s title odds rest on the shoulders of reigning MVP LeBron James and really, if there was one guy you’d trust with your money, it’s this dude. The four-time MVP is expected to lead a revamped Heat team that made a couple of key additions to its title-winning team from last season. Former number 1 pick Greg Oden is making a return to basketball after a four-year injury lay-off to provide some interior defense for the defending champs. Another high-lottery pick, Michael Beasley, was also picked up, returning to the team that drafted him second overall in 2008. And yeah, the Heat still have LeBron, Dwyane Wade, and Chris Bosh to lead the team so there aren’t really any arguments on other teams supplanting Miami as the betting favorite.

But if you think that Miami is poised to regress this year, a number of contenders offer some pretty palatable betting odds that should present some value heading into the season opener tomorrow. The Chicago Bulls will have former MVP Derrick Rose back in its line-up and sportsbooks are paying serious attention, giving the Bulls 12/1 to not only beat the Heat in the East, but also take down whoever’s coming out of a loaded Western Conference.

Getting equal 12/1 odds are the heartbroken losers of the most recent NBA Finals, the San Antonio Spurs. It’s easy to look past the Spurs given the advancing ages of Tim Duncan and Manu Ginobili, but that sentiment has been thrown around for the past five or so years. And don’t forget, the Spurs were 28 seconds away from winning the NBA title last year only to see Ray Allen hit what has arguably become the biggest shot in NBA Finals history to save the Miami Heat.

After the quarter of the Heat, Thunder, Bulls, and Spurs, another four teams are jumbled together at the 14/1 slot, all of which, in fact, make some serious cases to be NBA champions by the end of the year. The Indiana Pacers took the Heat to the limit in the Eastern finals last year and are poised to receive another jump from budding superstar Paul George. The Houston Rockets, meanwhile, take to the court with a new big man in Dwight Howard to supplement the firepower the team already has with James Harden, Chandler Parsons, and Jeremy Lin. Then there are the LA Clippers, which has new coach Doc Rivers calling the shots, a huge upgrade from the clearly overmatched Vinny Del Negro. Finally, there’s the Brooklyn Nets, which has the most intriguing line-up in the league with the additions of Paul Pierce and Kevin Garnett, not too mention Jason Kidd, who retired last year only to return to the bench, this time as a rookie head coach.

All four teams have intriguing value, especially if they come out of the gate like gangbusters.

From there, another three teams have been slotted in the 20/1 to 22/1 range: the New York Knicks, the Golden State Warriors, and the Memphis Grizzlies. These teams, while having more questions than those that have already been mentioned, are all capable of making a run at a title, but a lot of things have to go right for them to have any serious aspirations to contend for the championship.

When you’re in the business of wishful thinking, the Los Angeles Lakers are at 30/1 odds, a ridiculous number for a team that’s going to spend the better part of the season without Kobe Bryant to bail it out. That number is a testament to the popularity of the team, and quite possibly, the delusion some people might have that the Lakers can still make some noise with Nick Young shamelessly gunning three-pointer after three-pointer in every game.

In the end, unless something happens to LeBron James this year, there’s no reason why anybody should pick any team other than the Miami Heat.