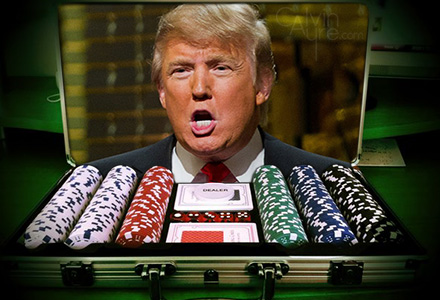 The list of Atlantic City casinos that have received their online gambling permits continues to grow.

Now, you can add Trump Entertainment’s two casinos to the mix.

With more permits likely to be handed out in the coming days, Trump Taj Mahal Casino Resort and Trump Plaza Hotel and Casino became the third and fourth casinos in Atlantic City to receive the proverbial green light from state regulators to proceed with offering online gambling in the state.

“We are very pleased to acknowledge that Trump Plaza and Trump Taj Mahal have received the third and fourth Internet gaming permits in the state of New Jersey,”  Trump Entertainment Resorts CEO Robert Griffin (not the football player) said in a written statement.

“This is very positive for the company and the Atlantic City market.”

Despite being owned by the same company, the two casinos will offer online gambling throughout the state using different web partners. Trump Taj Mahal will have Ultimate Gaming on its side whereas Trump Plaza will be partnering with Betfair for its own online gambling operations. The statewide launch for online gambling has been scheduled for November 26. The big day, however, will be preceded by a five-day trial period that begins on November 21, a span of time that will most likely be used tweaking and improving the software to ensure that the grand launch goes by without so much of a hitch in their plans.

With the two Trump casinos already receiving their gambling permits, that leaves six more casinos in Atlantic City that have yet to receive theirs. More permits are scheduled to be handed out in the coming days, so that’s not so much of a problem for any of the casinos yet to have their permits filed and approved by the New Jersey Division of Gaming Enforcement.

Revel and Atlantic Club Casino remain the only two of the 12 casinos that have not divulged any information surrounding their prospective partners. As for the rest, those permits aren’t so much a question of “if they’re coming” as it is “when they’re coming”.

So sit back and relax, fellas. Those online gambling permits are coming out pretty soon.