Home / Sports / Pete Rose’s gambling checks are up for auction 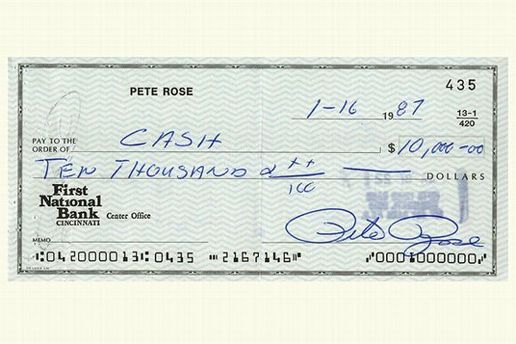 Pete Rose is one of the greatest baseball players in history. He’s also the only one to be banned for life because he decided to bet on baseball games. We wholeheartedly agree with the first statement but vehemently disagree with the second one. It’s been too long of a ban that it doesn’t even seem right anymore to keep him away from the game while ‘roided cheats like Mark McGwire are given opportunity after opportunity to be employed by the league.

But that’s a whole other topic for another day.

This is about Pete Rose and a handful of memorabilia that recently went up for auction last week, specifically a number of checks that Charlie Hustle wrote for his gambling habits back in the 80’s. Talk about the a prized gambling memorabilia; these checks are right up there with the best of ’em.

The divisiveness surrounding Rose’s status in the game is all because of his past addiction on betting on games, which earned him a lifetime ban from the sport in 1989. It was physical evidences like these checks, according to Ken Goldin, president of New Jersey-based Goldin Auctions, that ultimately spelled Rose’s expulsion from the sport, making these pieces of memorabilia that much more appealing to collectors.

Imagine being in possession of a Pete Rose check – you probably can’t cash it now, for what it’s worth – that he wrote to pay off his debts. That’s a pretty cool item to have and show to your buddies. The online auction is currently on-going, which means you have the chance to scoop up one of these checks if you go past the minimum bid of $2,500.

Rose is still banned from baseball, which is a travesty in its own right. But you can’t deny the contributions he made to the sport as baseball’s unquestioned greatest hitter. You don’t get to have 4,256 hits without being a great player. But his unmistakable itch to bet on game was his undoing. He shouldn’t have done it, that much we agree. But he’s paid his penance and it’s time his contributions as a player should finally be recognized.

If for nothing else, though, owning one of those checks he used to pay off his gambling debts is as good a memorabilia to have of one of the sport’s true greats.