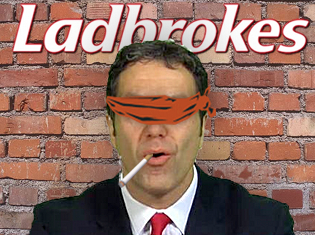 UK betting outfit Ladbrokes made investors sing the blues on Thursday by warning that profits at its much-maligned digital division would be significantly below earlier projections. Lads CEO Richard Glynn (pictured enjoying one last smoke) said Lads’ online site would likely generate profits of between £10m and £14m in FY 2013, a far cry from the £27.5m estimate made earlier this year. Glynn said the recalculation was necessary due to “a lack of competitiveness in sportsbook, lower margins than planned and a greater disruptive impact than expected” from Lads’ ongoing transition to a Playtech-powered digital offering, following the five-year licensing deal Lads struck with the software providers in March.

Lads’ transition to a Playtech-powered site is being hampered by the process of disengaging from Lads’ existing contract with Playtech rival Microgaming. Glynn said Lads was attempting to negotiate an early end to its Microgaming deal but that Microgaming was experiencing “fear, real fear, of helping their biggest rival, irrespective of the fact they could make money for it.” The exact expiry date of the Microgaming contract is private information, but Glynn insisted that the Playtech integration was “on track” to be complete by “early 2014.”

Glynn attempted to soften the blow of the digital doldrums by reporting that turnover at Lads’ 2,500+ retail betting shops has improved since the company reported its depressing H1 earnings in August. At the time, Lads suggested the summer heatwave had kept punters indoors, leading to a drop in retail traffic, while leaving unsaid precisely why these supposed shut-ins weren’t simply transferring their action to Lads’ online operation. But while retail traffic may have returned with cooler weather, Glynn warned that unfavorable football results would likely cut into retail margins.

Investors rewarded Lads’ honesty by pushing the stock down nearly 8% on Thursday to close at 173.8p, a new 2013 low point and well off the mid-March 243p peak that accompanied the Playtech announcement. Investec analyst James Hollins called the online numbers “unacceptable” while an unidentified ‘top ten investor’ told the Telegraph that Glynn was guilty of consistent “over-optimism” regarding the online division and that institutional investors’ patience was “close to running out.”

Canaccord Genuity analyst Simon Davies noted that Lads’ annual digital profits have fallen from £63m to below £14m since Glynn assumed the CEO mantle in April 2010, and suggested Thursday’s news would create “considerable pressure” for Glynn to step down. Should Glynn heed that advice, Davies believes Lads could be ripe for a takeover. Lads’ chairman Peter Erskine attempted to quell such suggestions by stating that the board remained “fully confident” in present management’s ability to turn things around, but Investec’s Hollins called Erskine’s statement a “quasi ‘kiss of death’” for senior staffers.