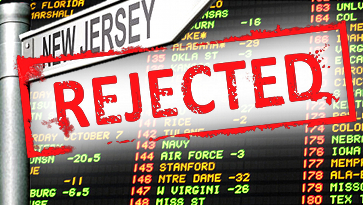 The US Third Circuit Court of Appeals has upheld the permanent injunction preventing New Jersey from offering legal sports betting to state residents. In June, New Jersey and its betting advocates had squared off in a Philadelphia court against the US Department of Justice, the four main professional sports leagues and the National Collegiate Athletic Association (NCAA) over the constitutionality of the 1992 federal PASPA sports betting edict that bans single-game sports betting in every state except Nevada. On Tuesday, the Third Circuit’s three-judge panel issued a split decision rejecting New Jersey’s appeal of US District Judge Michael Shipp’s February decision to put the brakes on the state’s sports betting plans.

In writing the majority opinion (read the full document here), Judge Julio M. Fuentes said New Jersey’s sports betting legislation represented a clear violation of the federal PASPA prohibition and thus “under our Constitution, must yield.” The majority judges said they hadn’t been asked to “judge the wisdom of PASPA or of New Jersey’s law, or of the desirability of the activities they seek to regulate. We speak only to the legality of these measures as a matter of constitutional law.”

The majority opinion upheld the leagues’ claim to standing in the case, which New Jersey had challenged on the basis that the leagues’ popularity and revenue had grown exponentially in the years since legal betting was allowed in Nevada, rendering the leagues’ claim of injury moot. The court declared that while many observers would agree with these ‘appeals to commonsense,’ such truths “do not legally deprive the Leagues of standing.”

Fuentes held that it was “self-evident” that sports betting, as an economic activity that substantially affects “interstate commerce,” met the criteria for federal regulation under the Commerce Clause. As for New Jersey’s insistence that Nevada’s sports betting privileges amounted to a violation of the Constitution’s equal sovereignty doctrine, the Court suggested the appropriate remedy would not be to authorize betting in other states but to invalidate Nevada’s privileges, a nuclear option that New Jersey hadn’t sought. The court said New Jersey’s preferred option of expanded betting had undermined their argument, and would do “far more violence to the statute, and would be a particularly odd result given the law’s purpose of curtailing state-licensed gambling on sports.”

Fuentes stated that PASPA “is not telling the states what to do, it is barring them from doing something they want to do.” Invalidating contrary state law “does not implicate a state’s sovereignty or otherwise commandeer the states.” Fuentes argued that New Jersey’s position that sovereignty is violated when a state is precluded from following a policy different than that set forth by federal law “would be revolutionary.” Fuentes said that invalidating a federal law under the anti-commandeering principle would be a first for the Third Circuit and a step that even the US Supreme Court has only taken twice.

As for the DOJ’s argument that PASPA is constitutional because it only prevents states from passing laws authorizing sports betting and doesn’t prevent states from repealing laws banning sports betting – which would create a proliferation of storefront bookies operating under a regulation-free Randian utopia – Fuentes says that just because Congress “gave the states a hard or tempting choice does not mean that they were given no choice at all, or that the choices are otherwise unconstitutional.” 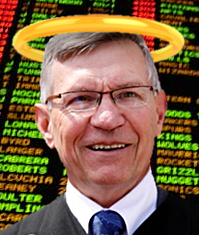 I OBJECT!
The 22-page dissenting opinion written by Judge Thomas Vanaskie (pictured right) agreed with the majority on the issues of standing and equal sovereignty. However, Vanaskie differed on the commandeering principle, saying PASPA “conscripts the states as foot soldiers to implement a congressional policy choice.”

“Whether stated as a command to engage in a specific action or as a prohibition against specific action, the federal government’s interference with a state’s sovereign autonomy is the same … Any distinction between a federal directive that commands states to take affirmative action and one that prohibits states from exercising their sovereignty is illusory.”

While acknowledging Congress’ power to prohibit certain actions by state governments, Vanaskie noted that PASPA imposes neither regulatory nor deregulatory standards for sports betting, and “the Supremacy Clause simply does not give Congress the power to tell the states what they can and cannot do in the absence of a validly-enacted federal regulatory or deregulatory scheme.”

WHAT NOW?
New Jersey State Sen. Ray Lesniak, the prime mover behind most of the state’s pro-gambling legislation, called the ruling an “injustice” but chose to focus on the positive, noting it was the first time any judge had taken the state’s side on this issue. Lesniak said this offered hope for appeals up the legal food chain, including the option of requesting a rehearing of the suit by the full Third Circuit appeals court or for the US Supreme Court to hear the case. At a gubernatorial campaign stop on Tuesday, New Jersey Gov. Chris Christie told reporters the state would “definitely” ask the Supreme Court to hear the case.

Two New Jersey congressmen – Reps. Frank LoBiondo and Frank Pallone, who have filed separate federal bills in support of their state’s sports betting plans – issued a joint statement calling the decision “extremely disappointing.” Each man vowed to support the state’s willingness to continue the fight to the Supreme Court.

New Jersey has 45 days in which to request a hearing by the full Third Circuit court, something that Ifrah Law attorney Griffan Finan suggested was likely. Otherwise, New Jersey has 90 days in which to file a request for the Supreme Court to hear the suit. Four of the nine Supreme Court justices would have to agree to hear the suit in order for it to proceed. Finan noted that during the Supreme Court’s last term, it vacated or reversed five of the six Third Circuit appeals it agreed to hear.

Vanaskie summed up his dissent thusly: “no case law supports permitting Congress to achieve federal policy objectives by dictating how states regulate sports gambling.” From the perspective of a (not entirely unbiased) layman, Vanaskie’s opinion seems to be the one most firmly rooted in reality, especially since the majority opinion offered up the misguided declaration that “more legal gambling leads to more total gambling,” an assumption that has been debunked in studies by the Harvard Medical School, the University of Iowa, the government of the Canadian province of British Columbia and many others. Furthermore, the majority opinion appears to rely more on an unwillingness to upset the judicial apple cart, something the Supreme Court has little qualms about undertaking.