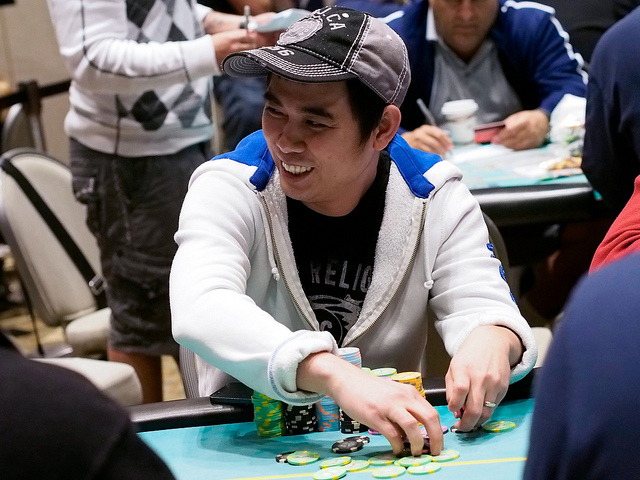 If you want some breathing room in a tournament then playing a stack of 700bb will generally do the trick. That’s exactly what happened to Cong Pham when he picked up pocket fives in the fifth level of action, and ran into king-eight and queen-eight of two opponents willing to go broke on [8c] [8h] [5h]. Pham never looked back from that point onward and was the chip leader when the eight levels of play were wrapped up.

One person who didn’t last eight levels – she didn’t last eight minutes – was Kara Scott. The PartyPoker Ambassador running pocket queens into pocket aces in a six-bet point against a rather lively opponent after she had played just four hands. Now that’s something you don’t see very often.

The recent World Series of Poker Circuit (WSOPC) event at IP Biloxi has seen a rush of female poker players making the latter stages of those tournaments, but Day 1A was a mixed bag for the ladies. WSOP Player of the Year contender, and WPT Ones to Watch, Loni Harwood, joining Scott with an early exit, and she was later to be joined by Amanda Musumeci and Ebony Kenney on the sidelines. Cherish Andrews had an amazing day on the felt finishing on 152k, to put her amongst the chip leaders, and WPT Ones to Watch Christina Lindley also made it through to Day Two finishing on 54k.

The reigning WPT Player of the Year had an interesting day after taking down a $1,650 Side Event for $47,360, before having a short, sharp shot at the main event proper. Salsberg not making the final cut, but will be happy with his days haul.