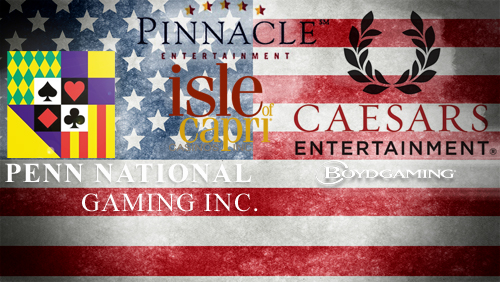 I’ve made some pretty good calls in my time as a columnist for this site, but there is one group of casino stocks I’ve consistently gotten wrong: US regional operators. Over a year ago, I recommended selling the entire sector; earlier this year, I argued there was no reason to buy any US-facing gambling stocks.

And yet, US regionals have been among the best performers in the gambling market. Caesars Entertainment (CZR) shares have more than quadrupled from their lows in November. Pinnacle Entertainment (PNK) stock has doubled over the past twelve months, while Boyd Gaming (BYD) has nearly done the same. Penn National (PENN) and Isle of Capri (ISLE) have both outperformed the broad market as well of late. The sector is strongly outperforming not only the broad market, but other gambling stocks as well.

There are some reasons for this beyond the performance of the individual companies. Gambling stocks generally outperform in rising markets, but fall quicker when investors begin to sell. Given that the broad market has had a nearly two-year run of basically uninterrupted optimism since hitting a bottom in October 2011, the gains for casino stocks are not necessarily surprising. The high-debt nature of companies such as Caesars, Boyd, and Isle magnifies that effect; since equity is such a small share of the company’s total enterprise value, a small gain in that enterprise value can create very large gains in the company’s equity.

(As an example, look at Boyd, which has $4.6 billion in net debt and a market capitalization of roughly $1.1 billion. The value of its business is thus roughly $5.7 billion – that would be the present-day cost of buying Boyd, counting its debt. Assume the market decides Boyd’s business is actually 10 percent more valuable; its enterprise value would rise to $6.3 billion. But its equity value goes from $1.1 billion to $1.7 billion – rising by more than half. This is the positive side of debt; earnings, and thus, equity values can rise substantially on modest movements in the overall business. The negative side is spending one-eighth of revenue on interest expense, as Boyd did in the first half of the year.)

There have been other, one-time, factors in the gain at regional operators. Pinnacle’s acquisition of Ameristar Casinos (ASCA), which closed last week, was a boon for shareholders of both companies. Ameristar gained nearly 20 percent, while shares of Pinnacle are up 75 percent since the acquisition was announced in late December. Caesars gets a little over one-third of its revenue from its regional casinos, but its share price gains have been driven by hopes for US iGaming and optimism surrounding its upcoming interactive spinoff. Penn gained 28 percent after announcing a spinoff of its own in November.

It’s also worth pointing out that the gains have been concentrated in the largest operators; smaller companies have been left out. Dover Downs Entertainment (DDE), owner of a single casino (and racetrack) in Delaware, has continued its long slide; shares that once traded at $20 now are valued at just $1.30. MTR Gaming (MNTG), owner of the Mountaineer Casino in West Virginia and Scioto Downs in Columbus, is flat over the last year, as is Full House Resorts (FLL), owner of properties in Indiana, New Mexico, Nevada, and Mississippi.

The difference in investor sentiment between the two groups is likely relatively simple: the market believes that larger operators can better withstand the mounting competitive pressures facing regional casinos. Dover Downs has been crushed by new facilities in Pennsylvania and Maryland (as have nearby casinos in Atlantic City). MTR’s gains at its new VLT facility in Ohio (where it competes directly with Penn’s Hollywood Casino) came from extensive promotional spending (according to Penn executives) and at a likely cost to revenues in West Virginia. Second quarter revenue at Full House’s Indiana casino fell 20 percent year-over-year in the second quarter; the company attributed the decline to “increased competition from recently opened Ohio casinos.”

Of course, these issues face the larger operators too. But the giants have the resources to find growth in other ways. There are corporate acquisitions, such as Pinnacle’s purchase of Ameristar or Boyd’s $1.45 billion takeover of Peninsula Gaming. There are new casinos in new markets; witness Penn and Caesars’ multiple new locations in Ohio, the free-for-all in Massachusetts, or the $90 million spent between Penn and MGM Resorts and Entertainment (MGM) in a fight for the final license in Maryland. And there is the ability to take market share through increased advertising and/or promotional spending.

But these initiatives all cost money – often substantial sums of money – and entail substantial amounts of risk. To be fair, the recent acquisitions have been beneficial to shareholders; as noted, Pinnacle has gained 75 percent since announcing its purchase of Ameristar, while Boyd has gained 71 percent in the sixteen months since its own merger announcement. And the mergers have, even in the short term, improved the combined companies’ fundamentals. In the first half of 2013, Ameristar actually created 40 percent more profit than Pinnacle did, even when adjusting for one-time items. With Pinnacle guiding for $40 million in cost savings annually after the merger’s completion, it seems possible the combined company could see earnings power well over $2 per share, making PNK’s Friday close of $23.60 a possible steal. Meanwhile, Boyd rose 18 percent after its second quarter results, as Peninsula boosted revenue and swung the company back to a profit from a year-ago loss.

But while both purchases have done well so far, the long-term costs have yet to be weighed. For Pinnacle, the Federal Trade Commission forced the company to divest two properties, the Lumiere Place in St. Louis and an unfinished development in Lake Charles, Louisiana. Meanwhile, the company’s debt will more than double once the acquisition is complete – as will its interest expense. Indeed, the added interest expense should exceed the $40 million in so-called “synergies,” meaning the combined earnings of Ameristar and Pinnacle may decline in the near term, even when discounting the costs of the merger itself. At Boyd, the Peninsula purchase has left an even shakier balance sheet, with debt over four times equity.

The bigger problem for the large regionals is that, going forward, they simply won’t be able to use acquisitions to provide more growth. To begin with, there aren’t many sensible targets remaining. Isle of Capri is the smallest of the regional group left independent; but it has over $1 billion in debt, meaning a total purchase price would come in at a minimum of about $1.5 billion, more than the cost of either Peninsula or Ameristar. The company’s portfolio – focused in Mississippi, Missouri, and Iowa – would also likely require some of the same divestment forced on Pinnacle in the wake of the Ameristar merger, as Isle properties overlap with several of its competitors.

Even if a target did make sense, it’s not clear who is left with the financial flexibility to buy. Caesars is clearly not a candidate, given it’s $20 billion-plus in debt. MGM has been touting its own recent debt prepayments in an effort to improve its balance sheet; meanwhile, its proposed projects have been major, high-end integrated resorts in places like Washington D.C. and Toronto, making Midwestern regional properties a strange fit. Pinnacle and Boyd are too stretched from a debt standpoint to raise another billion dollars; Penn is dealing with its REIT spinoff and would rather look to sell and lease back the buildings of its competitors, rather than buy the businesses outright.

So without acquisitions to fuel growth, the problem for regionals is: where can that growth come from? New markets have been one method; but new markets have been rather disappointing of late. Penn National blamed its second quarter earnings miss in large part on weakness in its new Ohio properties. In the company’s post-earnings conference call, CEO Peter Carlino told listeners that “the issue has largely been that Ohio has not ramped up as quickly as we would have hoped.” The problem in Ohio has been competition; Penn executives had previously noted that MTR Gaming’s Scioto Downs property was outspending them “4 to 1” in promotional spend in Columbus. On the Q2 conference call, Penn chief operating officer Timothy Wilmott now complained about Caesars’ discounting at its Horseshoe Cincinnati. “I can’t think in my almost 30 years in this business [of] a new property opening that discounted their product – their brand new product – to these levels to try and create [customer] trials at the expense of profitability,” he claimed. He quoted a letter from an Ohio customer who explained her inability to visit Penn’s Hollywood Casino Lawrenceburg, just east of Cincinnati. “I can’t even remember when I last used my own money to gamble there,” she had written.

So Ohio has disappointed Penn; but it has also strongly affected other companies. Revenue was down 20 percent at the Rising Sun in Indiana; 11 percent at MTR Gaming’s Mountaineer Casino in West Virginia; and 14 percent at Pinnacle’s Belterra property in southern Indiana. Those losses all came, according to each company, from the impact of the new Ohio casinos.

So, without acquisitions to fuel the fire, and with new markets seemingly limited for the next two years to Massachusetts (there has been little news of potential expansion of land-based gaming of late), US regionals seem likely to see flat growth, at best. And flat revenue growth generally leads to lower earnings multiples, which leads to lower share prices. US regional operators have, of late, been able to use acquisitions, manage expenses, and increase promotional spending to make incremental earnings gains among a competitive landscape and a weak global backdrop. That can’t last forever; at some point, the companies, and their stocks, seem likely to return toward Earth.