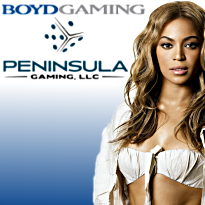 Nevada-based casino operator Boyd Gaming Corp. has announced it will pay $1.45b to acquire Peninsula Gaming LLC. The deal – $200m in cash and approximately $1.2b of debt including a $144m note provided by Peninsula – will add five casino properties in Iowa, Kansas and Louisiana to Boyd’s portfolio. If EBITDA at one of these properties – the Kansas Star Casino near Wichita – exceeds $105m in 2015, Boyd will make an additional payment of 7.5x earnings over $105m. Boyd currently operates casinos in Nevada, Illinois, Indiana, Louisiana, Mississippi and New Jersey. Boyd CEO Keith Smith expects the Peninsula deal will be completed by the end of 2012 and will be “immediately accretive to earnings and significantly increase our cash flow.”

The Pennsylvania Gaming Control Board’s figures for table games revenue at the state’s 11 casino operations in April show a 6.83% rise over the same month a year earlier. Total revenues were $56.5m from 1031 tables, compared to $52.9m from 869 tables in 2011 – a 10% drop in per-table revenue. The total is also a step back from the record $61.8m haul recorded in March and fears are that increased competition from surrounding states – including the recent casino launch in Cleveland – may slow the remarkable ascent that saw Pennsylvania become the country’s third largest casino market last year. Sands Casino Resort Bethlehem led all operators with $10.8m from 152 tables, with Parx Casino in second, earning $8.9m from 183 tables. On a per-table basis, the SugarHouse Casino was the star performer, reaping $7.3m from just 54 tables.

The humiliations endured by Atlantic City’s casino sector seemingly know no bounds. Wednesday saw the start of the two-day East Coast Gaming Congress (ECGC), but organizers were rushing around like mad Tuesday night after the host venue – the newly opened Revel casino – abruptly booted them out of its Ovation Hall to accommodate rehearsals by pop singer Beyoncé, who is making her post-partum return to the stage for a four-show stint over the Memorial Day weekend. Both conference organizers and Revel reps were downplaying the extent of the pandemonium brought about by the last minute venue switcheroo, but seriously… First the ECGC gets dissed by Gov. Chris Christie, now Beyoncé? Wonder if Beyoncé’s hubby Jay-Z could list AC’s other 97 problems…

North of the border, billionaire construction titan Larry Tannenbaum has announced he’ll be among the bidders for the city’s proposed destination casino. Tannenbaum, also the chairman of Maple Leaf Sports and Entertainment (the company that controls the city’s lucrative National Hockey League franchise), said he prefers the city’s waterfront as the site on which the casino should be built. Tannenbaum said his bid would need to be partnered with a firm that has casino experience.