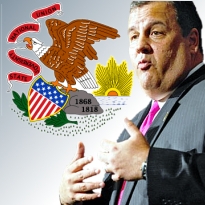 Illinois, the first US state to sell individual lottery tickets online, is looking to expand its online offering to include poker, casino games and anything else not expressly prohibited by state or federal laws. On Monday, State Senate President John Cullerton (D) sent word to his colleagues in the state legislature and to Gov. Pat Quinn that Illinois needed to set up a Division of Internet Gaming within the Illinois Lottery to oversee the creation of “a single internet gaming platform to usher in igaming as well as permitting the division to partner with existing Illinois gaming entities and other third parties at the appropriate time.” Like every other state not named Utah, Cullerton says Illinois needs to move fast if it doesn’t want to get left behind, but also because the current legislative session ends May 31.

Over in New Jersey, Gov. Chris Christie has decided to cancel his keynote address at this week’s East Coast Gaming Congress at the Revel Casino in Atlantic City. Christie’s press secretary claimed the cancellation was “nothing more than a scheduling conflict” and that Lt. Gov. Kim Guadagno would assume Christie’s place at the podium on Thursday. But some observers are interpreting Christie’s cancellation as a way of lowering his profile on the online gambling issue while he’s still on the shortlist to become Republican presidential candidate Mitt Romney’s running mate in the November elections. A wishing-to-be-anonymous Atlantic City casino executive told Philly.com that “the governor cannot be in front of the gaming industry right now.”

Christie’s declared scheduling conflict comes hot on the heels of two opinion polls on the issue of online gambling – one suggesting Garden State residents were agin’ the idea, another (initiated by Christie’s office) suggesting the opposite. But as NorthJersey.com’s John Brennan pointed out, despite being the country’s second biggest casino market, New Jersey residents aren’t exactly the most informed audience on gambling issues. In the Gov. Christie poll, a mere 10% of respondents correctly identified that legal online horse betting is currently available to NJ’s adult residents. More than a third (35%) said there was no such option, while 55% weren’t sure. You know, Mr. Governor, the added tax revenues from online gambling might work wonders on improving the state’s literacy levels.