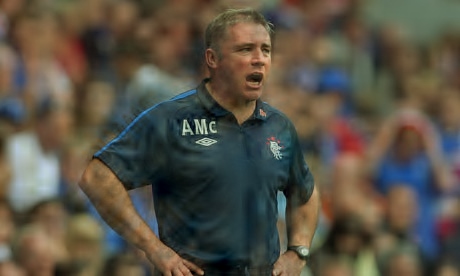 Days after the Scottish Football Association accused Rangers midfielder Ian Black of gambling in football games, team manager Ally McCoist shot back at the FA, claiming that gambling on matches isn’t an anomaly in Scottish football, but rather quite the norm.

The Rangers manager produced a list of over 100 players and officials within Scottish football who he believes gamble on matches, a potentially embarrassing situation for the Scottish FA should the list be outed to the public.

McCoist did say that he won’t disclose the names on the list, but he was equally emphatic that gambling was rampant within the association and that steps need to be taken by all parties involved to set guidelines on what can and can’t be done with regards to gambling on football games.

“What I’m asking for is for everybody to get around a table, whether it’s the SFA, the players’ union, bookmakers, whoever,” McCoist said.

“Let’s all sit around a table and find out what’s allowed, what’s not allowed and then we can start again.”

McCoist also took the SFA to task, or at least dropped hints on the curiosity of Black being the only player to incur the wrath of the association.  “If you’re asking me why the account was opened in 2006 and it’s taken until 2013, I don’t know the answer to that, if that’s the question you are asking me,” the Rangers boss said

“It’s a valid question but I don’t know the answer to it.”

McCoist’s comments predictably caught the attention of the SFA, which responded rather swiftly in reminding the manager that rules within the association are explicit and straightforward when it comes to gambling.

A zero tolerance policy is in place in Scotland, which restricts players from staking money on any football matches anywhere in the world.

“Team staff, players, referees, or anyone else under the jurisdiction of the Scottish FA, shall not bet in any way on a football match. If he needs further clarification on that, he can call us.”

The question now is: how legitimate is that list of McCoist and if there really are a whole lot more players and officials betting on games that the SFA doesn’t know about it, how long does it take before this whole can of worms is thrown in the association’s face?