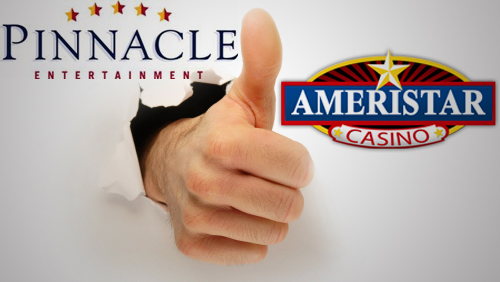 Months of negotiations has finally led to this moment: Pinnacle Entertainment has officially completed its acquisition of Ameristar Casinos.

The deal, which is worth $2.8 billion including assumed debt (Pinnacle paid $26.50 for each share of Ameristar stock), will add eight new properties to Pinnacle, including the Kansas City Ameristar, which has been hailed as one of the “better regional properties” in the industry by Janney Montgomery Scott analyst Bria McGill.

“We are delighted about our new company and the excitement that comes with joining the Pinnacle Entertainment family,” Sean Barnard, the general manager at Ameristar in Kansas City, said, as quoted by the Kansas City Star. “We don’t predict any immediate or significant changes.”

The Federal Trade Commission officially gave the go-signal on Pinnacle’s acquisition of Ameristar after the former assured the commission that it wouldn’t hold a large share of any existing markets where both companies have competed in. As part of the deal, Pinnacle acquiesced to divesting a number of its recently acquired properties, including the Lumiere Place Casino and Hotels in St. Louis and an Ameristar Casino development project in Louisiana.

As it stands now, a number of deals involving some of these acquired properties are already on the table, including a deal that would see Golden Nuggets Casinos acquire the Ameristar project in Louisiana. Interested buyers have also been lined up to purchase Lumiere Place, one of a number of Ameristar casinos in the area. Should any potential deal involving this casino falls through, Pinnacle will look to find another buyer for the other two casinos with the most likely option to sell being the Ameristar St. Charles.

Now that the transaction is finally complete, the next obvious step for Pinnacle is to determine how to manage an increased business portfolio brought about by the infusion of Ameristar’s casinos. One thing the company did stress was that no overwhelming changes are imminent and that Pinnacle could even use some of Ameristar’s business operations and use it on its existing properties.