I can’t help feeling that somebody is having their gluteus dragged over hot coals after The Horseshoe Casino in Cincinnati gave away a million bucks after a very expensive cock-up. 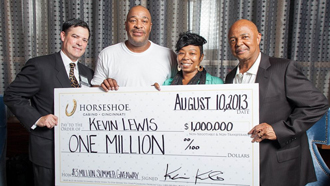 Caesars Entertainment (CE) recently announced that it was to give away $6 million in the months of July, August and September in two identical promotions called the ‘$3 Million Summer Giveaway’. Six separate million dollar prizes were to be given away to punters in both Cincinnati and Cleveland in a Total Rewards scheme freebie of life changing proportions.

During the 10th August draw in The Horseshoe Casino Cincinnati; employees of CE announced that the winner was Kevin Lewis. The delighted customer was shaking the hands of the casino chiefs, taking photographs with the media and picking up his giant check, when an employee realized they were handing the prize to the wrong Kevin Lewis!

After realizing the howler the Horseshoe Vice President and General Manager, Kevin Kline (no relation to the Oscar winner) decided to let both players keep the $1 million and I guess the name of the promotion has just been changed to the “$3.5 Million Summer Giveaway”

“This was our blunder. So, consistent with our commitment to do the right thing for our guests, Horseshoe awarded a $1 million dollar prize to each of the men.” Said Kline.

Tell me again…why are they in so much debt?

One man who would have been interested in this story is Berhar Merlaku. The Austrian man won £40 million whilst playing a slot machine in the Casino Bregenz, Austria, back in 2012. The win must have come as quite a shock to both the player and casino as a £40 million prize was impossible. A casino investigation revealed that a software error had turned Merlaku’s £60 win into a £40 million pound win.

Trying to follow in the future footsteps of CE, the Casino Bregenz tried to appease their customer by…wait for it….drum roll please…giving him a free voucher for dinner! I know…I can’t stop laughing myself. Merlaku took the casino to court where he demanded £5 million in compensation, before eventually accepting £1 million instead.

The next time you see a man running naked down the high street it might not be a bachelor party. Instead, it might be a working class man winning over a million pounds in a mobile casino.

That’s exactly what has happened to a 50-year old slot machine player, who has won £1,448,150.01 playing on his smartphone at the PartyCasinos m.partycasino.com site. There was no lucky mix up for this individual. Instead, he had to earn his £1.4m the hard way after deciding to spin a few reels on Melon Madness whilst walking about town.

It’s the largest-ever mobile jackpot, easily eclipsing the previous record of £866,000 when a 33-years old user took the jackpot on the slot machine Cop-a-Lot whilst playing at a William Hill mobile casino.

“I had to switch my phone on and off to check it wasn’t a glitch,” the man said at the time of his win. Not something I would have done personally!

“We are delighted one of our players has hit such an amazing jackpot – and broken the world record for a slots jackpot won on a mobile phone. We are focusing a huge amount of time and energy on building the best mobile casino available and it is great to see our players enjoying, and winning, on our games.” Said PartyCasino’s Director of Games Golan Shaked.