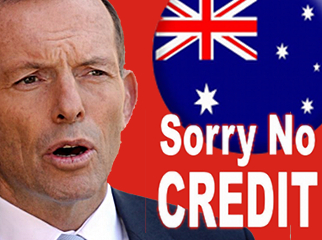 The ink is barely dry on UK gambling operator William Hill’s deal to acquire Australian online bookie TomWaterhouse.com and already the knives are out for everything online gambling. As expected, Independent Senator Nick Xenophon already issued a hastily updated version of his standard ‘sky is falling’ press release, but he’s now been joined by Opposition Leader Tony Abbott, who has pledged to make it illegal for online gambling companies to offer punters credit if his Liberal/National Coalition party wins power in next month’s federal election.

As with most anti-gambling initiatives, Abbott’s pledge come illustrated with a worst-case scenario depicted as standard operating procedure. In this case, it was Paddy Power’s Aussie operation Sportsbet’s ill-advised 2011 decision to give a problem gambler an $80k line of credit, which he blew through in a week, after which Sportsbet sued to take the gambler’s house. Never mind that Sportsbet is licensed in the Northern Territory, which permits operators to offer credit to punters and Sportsbet did eventually forgive the punter’s debt, but Abbott recognizes a political opportunity when he sees one.

Australians go to the polls on September 7 and with Julia Gillard having been booted from her role as Prime Minister and Labor party head in June, Abbott hopes that Gillard’s replacement Kevin Rudd – himself a former PM – is vulnerable. The brouhaha over Waterhouse’s promotional appearances during NRL games prompted Gillard’s government to strong-arm gambling operators into accepting new gambling advertising restrictions, and Abbott now says he’ll put teeth into that code by enacting federal legislation if the self-imposed restrictions prove ineffective.

TOPPING CALLS TABCORP COMFORTABLY WEAK
Also taking a shot at online gambling outfits is corporate bookie Tabcorp, although in this case the finger of scorn is pointed at international operators serving Aussie punters. While the profit plunge in Tabcorp’s past fiscal year was more to do with regulatory changes in the state of Victoria than with international competition, CEO David Attenborough wants the federal government to make it expressly illegal for international operators to accept Aussie wagers.

On this latter point, Attenborough got some support from Hills’ CEO Ralph Topping, who said the option of betting with firms not holding an Australian license was “not good for the consumer.” (You know, except for the whole ‘competitive pricing’ thing.) Topping made this claim despite the fact that, while Hills’ Sportingbet division holds an Australian license, Hills’ main Gibraltar-licensed websites have yet to get around to actively blocking Aussie customers.

Regardless, Topping saved some of his surplus tongue acid for Attenborough, saying Hills’ ever-expanding Aussie operations were “keen to take on comfortable monopolies” such as Tabcorp. Topping said monopolies “often mean weak management, weak performance” and suggested such companies don’t “have a place in the modern world.” Anyone else want to see Topping and Attenborough face off at dawn with aboriginal war clubs at the base of Ayers Rock?