Home / Business / Tom Waterhouse apologizes for controversy, but he loves being a bookie 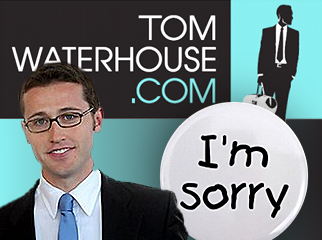 Australian bookie Tom Waterhouse has issued an apology to his fellow countryman for the brouhaha caused by his onscreen appearances during Channel Nine’s National Rugby League broadcasts. The Daily Telegraph printed a lengthy statement by Waterhouse in which he said he was “sorry” for the controversy, that he had “listened” to the public and had spoken with the TV network to “dramatically cut back on my advertising from tonight.”

Waterhouse’s appearances on the sidelines of NRL matches promoting live odds betting with Tomwaterhouse.com while holding a Channel Nine microphone prompted howls of outrage from anti-gambling politicians and Waterhouse’s fellow bookies. The fallout has included the scuttling of his $50m gambling partnership with the NRL and the decision by Prime Minister Julia Gillard to impose a ban on all live odds promotion during sports broadcasts “from the moment the players step onto the field to the moment that they leave the field.”

However, while Waterhouse may have chosen to make a tactical withdrawal, he defended his aggressive use of advertising as necessary “to compete with the overseas corporates who have taken over betting in Australia, and also with the TAB.” Over the weekend, advertising monitoring firm Ebiquity released data showing Waterhouse’s ad spend had risen 340% in the first four months of 2013. Waterhouse ran 2,923 ads during this period, compared to just 348 spots in the same period last year. Add in the sector’s top three spenders – TAB, Unibet and Sportsbet – and the number of betting ads on free-to-air TV nearly tripled during this period to 7,173 from 2,544 last year.

Waterhouse’s statement defended his efforts to run with the big boys by saying “competition is always good for the customer – the punter.” Waterhouse said his “privately owned, proudly Australian” online business is still “young and striving to grow.” Waterhouse loves being a bookie, describing it as “all I want to do.” But because of Waterhouse’s willingness to “stand up as the bookmaker, and do not present as a faceless corporation, I also have, somehow, become the public face of the entire Australian gambling industry.” Waterhouse says that people who don’t like gambling have extended their antipathy to him personally, “and I have to cop it on the chin.”

And there’s the rub. Any cursory inspection of the hundreds, if not thousands, of articles, editorials, blogs and social media posts about Waterhouse’s Channel Nine appearances invariably focused more on the man than his business. Bizarrely, Waterhouse’s penchant for smiling seemed to raise particular ire among those already predisposed to dislike him, of which there are legions. Waterhouse’s parents – father Robbie, from whom Tom assumed his bookmaking duties, and mother Gai, a celebrated horse trainer – were also routinely dragged into the mix, suggesting the animosity directed Tom’s way had more to do with people objecting to a young man of privilege having the unmitigated gall to carry on the family business.

The full fallout from this debacle has yet to be determined, with New South Wales considering a ban on bet logos on team jerseys and stadium signage, and South Australia clamoring for a total prohibition on betting ads during sports broadcasts, even during scheduled breaks in play. Tom Waterhouse may have fallen prey to the dreaded ‘tall poppy’ syndrome, but attempts to cut him down to size will be short lived. He’ll be back soon enough, and likely wearing a smile.