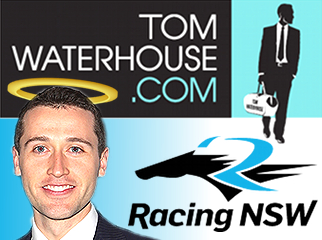 Australian online bookie Tom Waterhouse has been cleared of allegations that he traded on insider knowledge of a horse’s condition provided by his mother, star trainer Gai Waterhouse. The brouhaha arose after More Joyous, a horse trained by Gai, seriously underperformed at the All Aged Stakes at Royal Randwick Racecourse on April 27.

Before and after the race, More Joyous’ owner John Singleton publicly tore a strip off Gai, alleging that she’d told her son that the horse wasn’t in 100% physical condition and that Tom had passed on this info to former rugby star Andrew Johns, who then allegedly shared this info with ex-jockey Allan Robinson and brothel owner/mega-bettor Eddie Hayson.

The initial hearing on the allegations by Racing NSW stewards was a colorful affair, with Gai calling Singleton a “drunk” and a “sham.” Tom directly queried Singleton on how many drinks he’d had before challenging Gai, to which Singleton replied: “Two or three beers before the race and as much as I could drink afterwards.” Following the hearing, Tom told reporters the exchange had been “pretty entertaining.”

Much of the alleged controversy stemmed from a statement by Tom on his betting site the day before the race saying More Joyous “deserves to run favorite.” Aussie punters went on to collectively lose $4m betting on the thoroughbred (with all bookies, not just TomWaterhouse.com). But claims that Tom had profited from insider knowledge provided by Gai rang hollow after it was revealed that Tom’s site had lost $256k on the race after backing More Joyous to win.

The inquiry also learned that the night before the race, Gai’s team informed Singleton’s camp that More Joyous was suffering from “heat in the neck.” Singleton’s own veterinarian John Peatfield examined the horse in the morning, and ultimately cleared her to participate in the race. Peatfield told the inquiry that he “can’t guarantee she’ll win, because that’s not my job, but I can’t see a reason not to run her.”

On Monday, Johns vigorously denied that Tom had given him privileged info on More Joyous’ condition. Johns said that Tom only remarked that he “didn’t like” the horse. It was this comment that Johns passed on to Hayson and Robinson. There was a bit of a farce after Robinson – having already given his testimony – demanded to retake the stand, saying he wanted to tell the “whole truth.” But upon retaking the stand, he refused to speak unless Hayson and Johns were in the room. But they’d already left, so Robinson sat there, mute, until ordered to stand down.

GAI, SINGO CHARGED
After Monday’s hearing, Gai has charged with failing to report to the stewards “any condition or occurrence that may affect the running of a horse in a race,” as well as failing to keep proper records of the medications given to More Joyous. Gai has already pled not guilty, and the hearing of the charges is expected to take another week or so.

Singleton was fined $20k – later reduced to $15k – for making unsubstantiated claims on television and engaging in conduct prejudicial to the image of racing. Singleton pled guilty, calling his attack on Gai “inappropriate and regrettable.” Perpetual anti-gambling scold Senator Nick Xenophon called it “extraordinary” that Singleton had been fined, accusing Racing NSW of “shooting the messenger for speaking up.” Xenophon neglected to add that Singleton had spoken up about something that apparently never happened.

Racing NSW intends to continue investigating allegations made by Hayson that someone in Gai’s camp had alerted him as to the horse’s condition and that “everyone knew the horse had problems, except poor Singo.”

PICK A NAME, ANY NAME… EXCEPT THE ONE YOU WERE BORN WITH
Tom, meanwhile, was cleared of any wrongdoing, with the stewards finding no evidence that Tom was (a) aware of More Joyous’ condition or (b) that he passed on such info to anyone. However, Tom was warned by chief steward Ray Murrihy not to “get too close to the bone in the way you name and advertise your mother’s horses.” Murrihy said Racing NSW remained concerned over “the issue of using the family name to promote the business.”

Murrihy then provided a variation of claims made by anti-gambling politicians that Waterhouse had ‘blurred the lines’ between commentator and pitchman in his role as onscreen odds-giver for Channel 9’s rugby broadcasts. “The public perception of people looking at what’s said in those ads or commentary, and disassociating the stable from (the) bookmaking business is difficult, and that’s what we seek to achieve today, to put in place that there must be that disassociation between the two operations.”

Unfortunately, Murrihy declined to offer specifics on precisely how Tom Waterhouse is supposed to purge from Australians’ collective consciousness the fact that he’s a third-generation bookmaker whose mother is among the country’s best-known horse trainers. Parliamentarians investigating the intersection of gambling and sport will be next to grill Waterhouse on his alleged line-blurring. At this rate, Tom will likely be slapped with a trademark infringement suit by PriceWaterhousecoopers.

It’s increasingly evident that Tom’s high-profile marketing strategy – with himself as bright-eyed company spokesman – has led to an epidemic of ‘tall poppy’ envy. His cheeky performance at the inquiry and his subsequent exoneration will only likely accelerate this trend. But to date, his critics have likely done little but boost his public visibility without damaging his brand. Bad bet, boys.