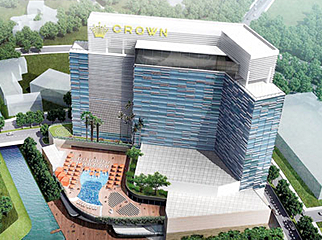 The week closed out well for Australian casino operator Crown Ltd. at home and abroad. On Friday, Crown submitted its final bid for a Sydney casino license, while rival operator Echo Entertainment filed its bid to extend The Star’s monopoly past 2019. The New South Wales government committee charged with choosing which bid lives and which one dies isn’t expected to announce its decision for another few weeks.

In the meantime, it’s hoped that the two warring parties will take a break from the snide verbal exchanges and/or destabilization campaigns that have ratcheted up sharply since the year began. Cabinet director-general Chris Eccles went as far as to tell each party in writing that he “strongly prefers” radio silence while the committee assesses the proposals.

CROWN COMPLEX TO TARGET ‘RICH INDIANS’
In Sri Lanka, Crown’s joint venture with local casino operator Rank Group finally has a name. Crown Complex is the banner being used to promote the $350m integrated resort casino (artist’s impression pictured at right) proposed for downtown Colombo. Rank Group boss Ravi Wijeratne said the casino’s target market would be “rich Indians” planning a gambling trip to Macau or Singapore. “We plan to divert them to Colombo which is nearer to their homes.” Wijeratne told the New Indian Express that India is largely an untapped market for Sri Lanka casinos, as most of the foreign clientele comes from China and Singapore, with India’s contribution at “barely 2%.”

Crown and Rank will each hold 45% of the joint venture, with an unidentified Singapore resident or concern holding the remaining 10%. Wijeratne told the Sri Lankan Sunday Times that he’d negotiated with Crown boss James Packer for two years before the Aussie casino mogul agreed to terms. Wijeratne said Crown Complex would differentiate itself from the local competition by catering to a “high-end clientele. For this we need an international brand,” and Crown fit the bill. Wijeratne acknowledged there were “many obstacles to overcome,” but says the plan is to begin work “by year end.”

COLOMBO CASINO CLUSTER
The government has stressed that no new casino license will be granted to Crown Complex, but acknowledged that Crown might acquire one of the existing casino licenses, which Wijeratne has already pledged to provide. There are around nine small casinos already in operation in Sri Lanka – although only four are licensed and registered with the Department of Inland Revenue – with names ‘borrowed’ from Las Vegas casinos, such as Wijeratne’s Stardust.

The government has come up with a plan to relocate all the nation’s casinos to a special zone in Colombo’s D.R. Wijewardena Mawartha/Beira Lake area – the same space in which Crown Complex will be built. The plan is not entirely new. Over a decade ago, the government of the day wanted to create a ‘Casino City’ in Bentota, south of Colombo, to ‘clear’ the capital of its gaming joints as part of the 2002 Tourism Masterplan. The present administration’s plan to cluster the casinos into a Colombo tourist hub is also viewed as a way for the government to shutter the unlicensed casinos, as only tax-paying casinos will be allowed into the dedicated fun zone. The idea of creating a net reduction in the number of casinos may even pacify the nation’s Buddhist monks, who have been making noises about feeling very much at one with kicking some casino ass.

NOT YOUR AVERAGE POLITICIAN
Wijeratne’s Stardust is one of Sri Lanka’s registered casinos. The other three are owned by self-made millionaire Dhammika Perera, who not only controls around 10% of all Sri Lanka’s publicly listed firms, he also happens to be the nation’s current Transport Ministry Secretary. That means he gets to sit in on the debates involving the approval of Crown Complex, which would present serious competition for Perera’s own gaming operations. It conjures up images of Las Vegas Sands chairman Sheldon Adelson sitting in on a vote on whether to extend more credit to Caesars Entertainment.

Perera has a Hollywood-worthy backstory, having begun his business career hawking shoes on the street at the age of 19. Perera soon branched out, setting up five slot machines in his uncle’s café. Upon turning 20, Perera journeyed to Taiwan to learn how slot technology worked and soon began making his own machines. By the time he turned 23, he had a total of 285 machines in operation in Sri Lanka, only to have the government of the day ban slot machines shortly thereafter. Undaunted, Perera opened his first casino, Capricorn, featuring card games and roulette, that same year. In 1995, he opened his MGM casino, followed by Ballys in 1996 and Bellagio in 1998. Interestingly, even back in 2002, Perera told The Island that most of his casino’s foreign clientele were either from China or Singapore. La plus ça change…