Sheldon Adelson orders online gambling to get off his lawn 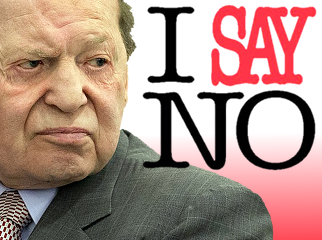 The interwebz is all abuzz over Las Vegas Sands supremo Sheldon Adelson’s op-ed in Forbes restating his opposition to online gambling in even more explicit terms. Adelson starts with the tired proposition that ‘click your mouse and lose your house’ may not be official online gambling industry marketing, “but it should be.” And things just go downhill from there. Based on his various roles as industry leader, father, grandfather and “citizen and patriot” of the US of A, Adelson is “adamantly opposed” to the further proliferation of online gambling, aka “a toxin which all good people ought to resist.”

Adelson’s moral opposition to online gambling was made clear back in December 2011, and he followed that up by confirming “even stronger” opposition in April 2012. Since then, the American Gaming Association had suggested that Sands had come around to their way of thinking regarding online poker legalization, but Adelson’s op-ed leaves no room for debate: “Whether it is full casino gaming, poker-only, or anything in between – this is a societal train wreck waiting to happen.” If the feds are going to pass any online gambling legislation, Adelson wants increased restrictions, not freedoms, as well as stiffer enforcement measures against international online gambling companies still serving US customers.

Adelson backhands critics who suggest he’s looking to protect his brick-and-mortar casino operations, insisting he’s “not afraid of competing with anyone.” If he felt differently about the online sphere, Adelson believes Sands “would be very effective competitors in this market place.” Adelson says he’s more worried that online gambling would lead to the “eventual demise” of tribal casinos, racetracks and commercial casino operators who lack Sands’ lucrative Asian presence, from which “almost all [Sands] casino profits come” and “where online gambling doesn’t exist and won’t be legalized soon, if ever.”

OPINIONS STRONG, FACTS WEAK
Adelson cites “recent research from a number of European countries” that suggests online gambling has cut B&M casino visitation by 20%. In December 2011, Adelson made his first mention of this European decline by referencing a conversation he’d had with European Casino Association chairman Ron Goudsmit. However, Goudsmit’s evidence appears to have been purely anecdotal. According to Adelson’s comments at the time, “I asked [Goudsmit] if he could quantify [the downturn]. He said he didn’t know exactly so I said, ‘Give me a guess. 5 percent? 10 percent?’ He said, ‘Yes.’”

Apart from a hit to casino bottom lines, Adelson’s more worried about “the plague” online gambling would inflict on society. Never mind that actual research from the UK – where soup-to-nuts online gambling has been legal for years – shows online gambling participation rates have yet to top 8% once you exclude National Lottery players. As plagues go, online gambling doesn’t appear all that serious an affliction. Unlike, say, lung cancer, which casino employees at Sands’ proposed EuroVegas development in Spain will face an increased risk of contracting due to Sands’ demand that Spain waive its indoor smoking laws.

Adelson invokes the clichéd image of toddlers having been “primed for the pump” by “addictive internet games” then graduating to wagering with their parents’ credit cards. Adelson also claims there’s no way to verify that online gamblers aren’t “betting under the influence of drugs or being coerced,” unlike in a B&M casino, where “behavior can be observed and ultimately managed by security and other staff.” Adelson might have added “where alcohol is readily available to any minor with a fake ID” or “where illegal drug use is permitted and casino staff must endure unwanted sexual advances provided the gambler is willing to wager millions,” but that might have undercut one of the legs on Adelson’s high moral throne.