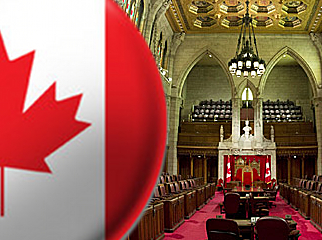 The whiff of scandal emanating from Canada’s Senate may be just what’s needed to push the stalled C-290 single-game sports betting legislation towards a final vote. C-290 passed the House of Commons last year with all-party support, only to face unexpected resistance in the Senate, an unelected body that has only rejected eight bills in seven decades – and has never rejected a bill that was unanimously approved by the House, as C-290 was in March 2012. The Senate is set to break for its summer recess at the end of June and there is no guarantee that C-290 will come up for a vote before then.

However, the Senate is currently awash in negative headlines regarding a number of senators getting caught fudging their expense accounts, and Government Senate Leader Marjory LeBreton is reportedly keen to demonstrate to Canadians – and to her increasingly annoyed fellow Tories in the elected House – that the chamber of ‘sober second thought’ is capable of more than just bilking taxpayers for unwarranted expenses. An unidentified Tory volunteer told QMI Agency that LeBreton was determined to fast-track votes on private member’s bills (PMB) such as C-290 before senators hit the beaches. While stopping short of confirming the story, LeBreton’s office issued an email saying the plan was to “advance all of the PMBs in a timely manner.”

South of the border, the US Third Circuit Court of Appeals has granted the Department of Justice another delay re New Jersey’s appeal of its recent defeat in overturning the federal PASPA sports betting prohibition. The Court had already agreed to delay the DOJ’s response to New Jersey’s filing from May 23rd to the 28th, but the DOJ sought a further extension due to a key member of their legal team ending up in hospital. Attorney Scott McIntosh was involved in a serious bicycle accident last week that required surgery and the DOJ isn’t sure when he’ll be able to resume his duties. The Court gave the DOJ until June 7 to file its response, after which New Jersey will have until June 14 to reply. The June 26 date for oral arguments remains unchanged.