Season XI of the World Poker Tour (WPT) is nothing but a memory as Chino Rheem wins the $25,000 World Championships at The Bellagio; his second WPT Main Event title in a career that has seen him earn over $7 million in live tournament earnings. 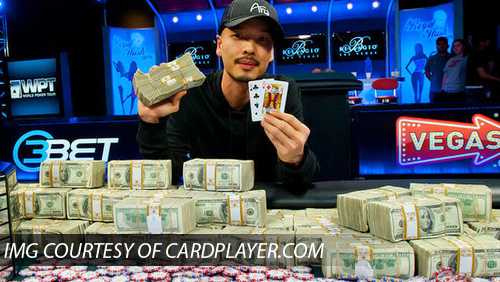 It may have taken 259-hands before the engravers could start etching the name of Chino Rheem onto the WPT Champions Club trophy, but it seemed a forgone conclusion as he led from start to finish on the final day of the $25,000 WPT World Championships at The Bellagio.

It took just 14-hands before the final table had its first casualty, and the blood belonged to the IveyPoker Pro David Peters. The Canadian Jonathan Roy eliminated Peters, who bubbled the final table of this event back in 2011. His demise came after calling an all-in during a three-bet pot on a flop of [Js] [6s] [2s] holding [Ts] [Td], for the pair and flush draw. Roy, who had check-raised jammed, was holding [Jd] [9d] and the hand held up. Peters took $173,993 for his troubles.

Chino Rheem continued to make more moves than a bowl of jelly, but it Roy starting to gain ground with his second elimination on the 54th hand mark. This time his victim was Brandon Steven who moved all-in for 520,000, and [Td] [Th], and Roy made the call with [Ah] [4h]. An ace on the flop followed by a four on the river sending Steven home $223,203 the richer.

Rheem looked over his shoulder, spied Roy and once again put his foot on the gas. At the end of 60-hands Rheem was sitting on eight million chips, and with Roy a distant second with 2,775,000 it was time to get back into cruise control. The tightest player at the table was Matt Hyman, with only 8.3% of his starting hands being played, and so it was no surprise when he turned up with pocket kings the second time he would move all-in. Jonathan Roy turning up with aces at the same time…now that was a surprise. The Hyman was finally broken in fourth place for $289,988.

Lindgren then doubled through Roy on two occasions to stick his baseball cap above the parapet – KK v A8dd and AJo v Q9o doing the damage. Roy got some of them back when he doubled through Rheem KK v A3cc, but Rheem would get them back with interest in a cooler of a hand that saw Roy eliminated in third place.

So it was Rheem versus Lindgren for the title; two of the most controversial characters in the game during recent years. Rheem was sitting on 11,020,000 chips and Lindgren had his work cut out with just 3,585,000. Lindgren did manage to double up once when his KJo flopped a king when all-in versus the pocket tens of Rheem, but Rheem would finally end it after when the pair clashed in their second all-in. Rheem moved with [Kd] [9c], Lindgren called with [Qd] [9d] and after five community cards came and went Rheem was declared the victor with King high.