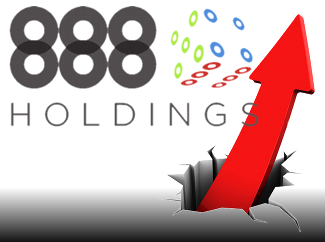 UK-listed online gambling operator 888 Holdings saw revenue rise 9% to a record $102.9m in Q1 2013 thanks in part due to the recent introduction of online slots in Italy and continued strong performance by 888’s poker operations. Casino revenue rose 13% to $47.6m while poker revenue rose 15% to $24.4m after what 888 CEO Brian Mattingley called “very successful winter marketing campaigns.” However, yield per active poker customer fell 1% to $52 during Q1.

“Strong sports margins” helped push revenue in the emerging division, which includes sportsbook and social gaming offerings, up 27% to $7.9m. 888 is on the hunt to replace its existing white-label sportsbook supplier following the sale of Blue Square Bet to Betfair. Speaking on a post-earnings call with analysts, Mattingley said 888 was in talks with a supplier that will enable 888 to cover “all sports, all products in a much different spectrum of countries and territories,” Italy and Spain, in particular. Mattingley believes the opportunity is there for 888 to become “a more serious player’ in sports betting, although he cautioned that 888 wasn’t about to challenge the likes of William Hill or Bet365 anytime soon.

Revenue from 888’s B2B arm Dragonfish was flat at $11m while bingo was 888’s lone contrarian channel, with revenue off 12% to $12m year-on-year (although bingo revenue rose 3% quarter-on-quarter). The company added over 100k customers in Q1, with its active B2C poker customers up 17% year-on-year to 474k and casino customers up 3% to 236k. The first 20 days of April have seen daily average revenue up 3% over the same period last year.

Mattingley said mobile is growing “very, very significantly” across all product lines. While still only accounting for “somewhere between 5% and 10%” of group revenue, it is nonetheless growing “very, very fast indeed.” Mattingley said all indications were that mobile revenue was “cumulative, it’s additional revenue” rather than cannibalizing existing PC revenue. The value of a mobile user was “slightly lower than our core PC,” but the CPA was also lower, resulting in a “very significant” return on investment.

Mattingley told Reuters that 888 expects to launch its Nevada online poker operation by Q3. Combined with its expected entry into other states once they turn on the online gambling taps, Mattingley predicted that the emerging US market would cause some “really influential numbers” to appear on 888’s balance sheet by 2015, although he cautioned that marketing costs would also increase significantly as companies battle furiously for the hearts, minds and wallets of US players.