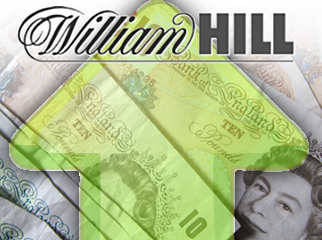 UK bookie William Hill may be a familiar figure on the High Street, but the company’s profits are increasingly found online. On Friday, Hills released an interim management statement covering the first three months of 2013 showing group revenue up 15% and operating profit up 8%.

Hills’ online casino revenue rose 4%, but declines in poker and bingo reduced total online gaming revenue growth to 2%. Nevertheless, Topping touted the fact that Hills has boosted its share of the UK’s online market from 10% to 15% over the past four years, and said the company was making “significant investments in marketing, technology and people” to boost that figure even higher. Topping said online operations accounted for 45% of Hills’ Q1 profits.

Things were less rosy at the retail level, where operating profit fell 3%. Retail revenue was up 8%, thanks mainly to a 15% rise in gaming machine revenue, although gross win per machine per week fell from £918 to £904 year on year. Over-the-counter (OTC) wagering handle fell 4%, but Hills enjoyed a 20.7% hold – well above the normalized 17% to 18% range – allowing OTC revenue to record a modest 3% increase. Hills blamed the OTC handle slip on weather-related fixture cancellations and lower turnover from this year’s Cheltenham festival.

Hills declined to provide specific numbers from its Nevada-based sports betting operations, saying only that William Hill US had made “a small operating profit” on a gross win of 7.9%. Topping noted that with the National Football League out of action until September, the US operation was “going through a quiet time at the moment,” but that he was nonetheless “pleased with the performance.” Topping also hinted that Hills was eyeing further US expansion, but played coy with the details, saying only “there is a lot going on … but it’s getting the right opportunities or identifying the right opportunities and they may not always be the obvious one. That’s all I will say.”

The past quarter has been an eventful one for Hills, what with the £459m acquisition of Sportingbet’s Australian operations and the £424m purchase of Playtech’s minority stake in WHO. To help cover all this outlay, Hills raised £373m from a rights issue.