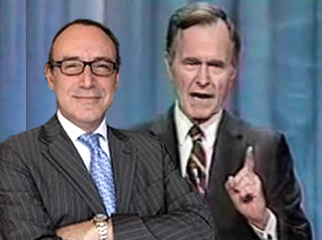 The head of Italy’s gambling regulator says there will be no new taxes imposed on online gambling. Luigi Magistro (pictured at right not wagging his finger), the new head of Italian regulator AAMS, made the declaration this week at an online gambling conference in Brussels organized by the European Social and Economic Committee. Magistro said “a reasonable level of taxation” was necessary if the nearly 200 operators holding Italian-issued online gambling licenses were to remain competitive with non-licensed companies serving Italian punters. Mind you, George H. W. Bush famously vowed “no new taxes,” only to renege two years later, so nothing’s carved in stone here.

With online slots having been introduced in December, Magistro suggested that Italy’s fledgling online market would be more or less fully formed this year after the addition of “minor products” like exchange betting and virtual gaming. As such, Magistro says people shouldn’t expect the market to repeat the rate of growth it enjoyed between 1999 and 2011. What’s more, Magistro said last year’s fall in GGR “shows the usual assertion that gaming spend is anti-cyclical is fundamentally incorrect.”

Magistro also announced he will chair a new observatory to provide “a concrete response” to the issue of problem gambling. The new group, which will consist of government ministry representatives and government-appointed experts, has been launched in part to assess the “true size” of problem gambling in Italy. Magistro said there was a need to ascertain the extent of problem gambling’s reach from a “technical and scientific point of view” in order to “fight to prevent it effectively.” The move follows the institution of strict new regulations regarding gambling advertising on TV and radio.