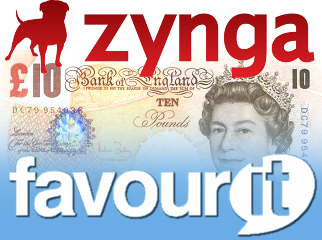 Social game developers Zynga have announced that Wednesday, April 3 is D-Day for the launch of its real-money operations in the UK. The ZyngaPlusPoker.co.uk and ZyngaPlusCasino.co.uk sites are the first fruits of the tie-up Zynga entered into with pan-European operator Bwin.party digital entertainment in October. For the moment, the UK sites are a standalone offering sharing a single wallet, although the ‘bZwinga’ hybrid also plans to offer poker and up to 160 casino games via Facebook and mobile later this year.

In a blog post, Zynga’s chief revenue officer Barry Cottle said this was “just the beginning” of Zynga’s real-money ambitions, although CEO Mark Pincus has stated that his company isn’t likely to attract “hardcore” real-money gamblers, hoping instead to convince some of its casual ‘mass market audience’ to try risking something other than virtual credits. Regardless, the announcement has sent Zynga’s stock up over 8% in after-hours trading, a surge that should last until investors realize that the UK is a highly competitive market in which its Bwin.party partner has found the poker sector to be much like Nicholas Cage described Holly Hunter’s womb in Raising Arizona: “a rocky place where my seed could find no purchase.”

FAVOURIT LAUNCH IOS APP, NEW ROUND OF FUNDING
Speaking of blurring the lines between social gaming and actual gambling, Australian social sports betting outfit Favourit is looking to expand its global reach via the release of a new iOS app. While there are plenty of social sports betting apps out there, Favourit provides an easy way to switch to real-money play by partnering with several online betting outfits, including Paddy Power, Paddy’s Aussie offshoot Sportsbet and Tabcorp subsidiary Luxbet. Favourit doesn’t actually process the real-money transactions, but allows customers of its partner sportsbooks the option of ‘socializing’ their real-money wagers.

Having already drummed up $3.6m in investment funding, Favourit has just launched a Series A investment round for other deep-pocketed types who wish to hitch their wagons to Favourit’s rising star. Favourit CEO Toby Simmons says the company’s current priority is internationalization, but cautions that the real-money aspect will be limited to jurisdictions in which such activities aren’t considered akin to baby-snatching. That said, the 26-year-old Simmons told Forbes’ Darren Heitner that players will appreciate Favourit features like Bet IQ, which ranks players on their historical betting prowess, allowing you to see through self-proclaimed pundits who might be talkin’ loud but sayin’ nothing. So even if you can’t legally place a wager in the US of A, you can still benefit from the knowledge of those who do enjoy such freedoms outside the Land of the Free.