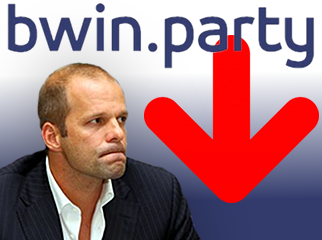 Pan-European online gambling operator Bwin.party digital entertainment saw earnings fall 17% to €164.9m in 2012, the first full year of operation since the merger of Bwin and PartyGaming. If that wasn’t bad enough, the company has warned that 2013 will not live up to analysts’ estimates, thanks in part to its new focus on regulated markets. Skittish investors ran for the hills on Friday, sending the stock down nearly 8% before it recovered somewhat to close down nearly 4.5% at 144.9p.

Bwin.party’s total loss for the year came in at €23.5m, a significant improvement over the €422.9m loss the company recorded in 2011, although €408m of that 2011 loss was due to impairment charges related to the March 2011 merger. Bwin.party claims to have achieved €46.5m in merger cost savings in 2012, beating their own forecast of €40m. But suffice it to say, the promised benefits of the merger are still way off in the distance, if in fact, that oasis of palm trees on the horizon doesn’t turn out to have been a mirage all this time.

Worryingly, Bwin.party’s daily average revenue in the first two months of 2013 was off 7% from Q4 2012, thanks to “user experience issues” as the company migrated players from Bwin and PartyGaming onto a single platform. CEO Norbert Teufelberger (pictured) acknowledged that bringing these two halves together meant “you may lose some of those players or see some reduced activity,” but says the company will refocus efforts to convince fleeing punters to return. That conflicts with Teufelberger’s statement that the decrease in early 2013 revenue was being offset by reduced marketing expenses, but perhaps Teufelberger has figured out a cost effective way to Jedi mind meld with players.

BWIN.PARTY A FAN OF STARS & STRIPES; POKERSTARS, NOT SO MUCH
Teufelberger says the way forward for Bwin.party is in regulated markets, although he declined to specify which of the markets in which it currently operates without a license would be on 2013’s exit list. As for future markets, the United States remains the company’s great white whale. Teufelberger revealed that Bwin.party reps would be meeting with New Jersey gaming regulators this coming week. Teufelberger believes the New Jersey market – where Bwin.party’s online poker joint venture partners MGM Resorts and Boyd Gaming have a presence – will end up being a chopped pot between Bwin.party and Caesars Entertainment. That is, provided PokerStars fails to win approval of its application for a New Jersey gaming license.

eGamingReview quoted Teufelberger describing Stars’ New Jersey application as “their all-in card in the US. They have already been excluded from Nevada and there will probably be language in other states’ regulations which excludes them.” (Teufelberger can’t have been happy that Illinois just deleted such ‘bad actor’ language from its proposed legislation, much as New Jersey did in December.) This is key to Bwin.party’s plan, as the company’s online poker success or failure is pretty much determined by whether it’s forced to compete with PokerStars. Bwin.party CFO Martin Weigold acknowledged as much following PokerStars’ post-Black Friday exit from the US market, which led Stars to refocus its efforts in Europe at the direct expense of Bwin.party’s market share.

However, Teufelberger revealed that Bwin.party had also been excluded from Nevada, although the decision was Bwin.party’s own. Teufelberger says the company had “chosen not to operate in Nevada,” despite having applied for a service provider license to service its MGM/Boyd partners. Teufelberger said the Nevada application was intended to benefit from federal online poker laws, and in the absence of a federal regime, “we may not need [the Nevada license] now” except as a possible vehicle into the California market via an interstate compact. This news likely has Bwin.party’s former co-CEO Jim Ryan wondering why he quit his post in December if it wasn’t to spare the company being grilled by Nevada regulators about Ryan’s former ‘bad actor’ role as head of Absolute Poker.