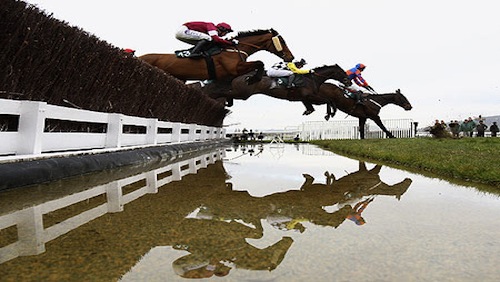 The Cheltenham Festival is one of the most eagerly anticipated horse racing events in the United Kingdom. It’s also a popular venue for bettors, which means that you can expect UK bookmakers to be on-hand during the four-day festival. Traditionally, UK bookmakers use the racing festival as a way to invite new bettors to their companies with plenty of recruitment promotions that are all designed to entice. As such, aggressive promotions are prevalent during Cheltenham and as is the case with endeavors like this, it’s not so much about bookies winning huge of sums of money. On the contrary, UK bookmakers expect to see a whole lot of red from bettors, all in the name of increasing their membership.

This year, in particular, could potentially be a bloodbath for the books because of the unique odds given to the four short-price favorites in the seven-race card to open the festival. Should all four favorites win their respective races, the Telegraph is reporting that books could be in deep to the tune of 25 million pounds in as short as three hours. While this news should ring like music to the ears of bettors, it doesn’t do much for UK bookmakers who are risking losing a whole lot money with the aggressive deals they’re offering.

Four horses are considered heavy favorites to win their respective races. Called the “Layers’ Four Horses of the Apocalypse”, these thoroughbreds could potentially deal the books millions in lost money if they hit. Two of the favorites, My Tent Or Yours and Hurricane Fly, have been priced at 7/4 and 2/1 odds, respectively. Meanwhile the other two, Simonsig and Quevega, are both at 4/6 odds. Should all four of these favorites win, then bookmakers stand to be deep into the red when the night mercifully ends for them.

But such are the risks these bookmakers are willing to incur just to gain new bettors into their fold. Whether its through best odds offers or bet refunds, there are no shortages of aggressive deals bookmakers are willing to offer to get new clients. But there’s a problem, especially if these bookmakers are trying to find water in a well that has pretty much dried up. Europe is a mature market and there’s only so much tapping of the drum books can make to acquire new players. Compounding that with the rising marketing costs that equates to more expenses and there’s not a whole lot of equitable returns bookmakers stand to gain from such a competitive market even if they risk losing millions with tired and outdated offers and promotions just so they can get more bettors in their fold.

Ultimately, it’s not so much about singular bettors as much as it is about the nature of the industry in Europe compared to a burgeoning and lucrative market like Asia. Forward-thinking sports books aren’t concerned about making a good name for themselves at the Cheltenham Festival. Instead, they’re already looking into setting up shop in Asian countries where there’s significantly lower cost of player acquisition to go with cheaper marketing costs and, most importantly, less competition of the cutthroat persuasion.

We get that tapping into a sporting event as big as the Cheltenham Festival has been a tried-and-tested method over the years. But therein lies the caveat. “Over the years” doesn’t necessarily mean you stick to it, especially if you know that there are far more lucrative options to explore. UK books that are still hinging their lots on acquiring new clients at events like Cheltenham are making the kind of risky gamble they want their clients to be making.

This is, by no means, an indictment on the Cheltenham Festival. It’s a fantastic event that’s worthy of all the prestige and acclaim it has received. This is about the perception that the event is where books are expected to court bettors to lengths far greater than they should. It just doesn’t make for good business for UK sports books to open themselves up to the risk of losing a lot of money just to gain new clients. There’s no sound rationale on trying to strike water in a dry well when there’s an ocean halfway around the world that’s just waiting with open arms.

Tradition notwithstanding, it’s time for UK bookmakers to drop the full-court press on Cheltenham, put those Magellan hats on, and set course for the East.