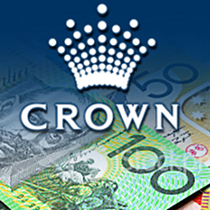 Australian casino operator Crown Ltd. recorded a profit of AU $180.8m (US $186.5m) in the first half of its fiscal year ending Dec. 31. That’s 34.1% below the $274.4m in the company’s previous H1 results, but this year’s numbers were hit by a $52m after-tax loss related to the falling stock price of rival operator Echo Entertainment, in which Crown holds a 10% stake. Excluding one-time expenses, profit fell a more reasonable 15%. Crown declared an interim dividend of 18 cents per share, 50.1% of which will go to majority owner James Packer.

Crown operates casinos in Melbourne and Perth, and holds a one-third stake in Melco Crown Entertainment, which operates the City of Dreams casino in Macau and will open a new casino-resort in Manila later this year. The Melco Crown joint venture contributed $64.5m to Crown’s H1 profits.

Crown is pushing hard to win final regulatory approval to open a VIP-focused casino in Sydney in 2019 when Echo’s existing regional monopoly expires. Craigie believes Australia needs a “critical mass” of luxury casino properties in order to be able to compete with Asia-Pacific gaming hubs like Macau and Singapore. Brushing aside suggestions that a second Sydney casino would cannibalize revenues at Echo’s The Star, or that planned upgrades at other Crown, Echo and SkyCity casino properties would create an imbalance between casino supply and VIP gambler demand, Craigie said Australia presently “has less than 2% market share… This is not a fixed market where Australian properties are going to cannibalize each other.”